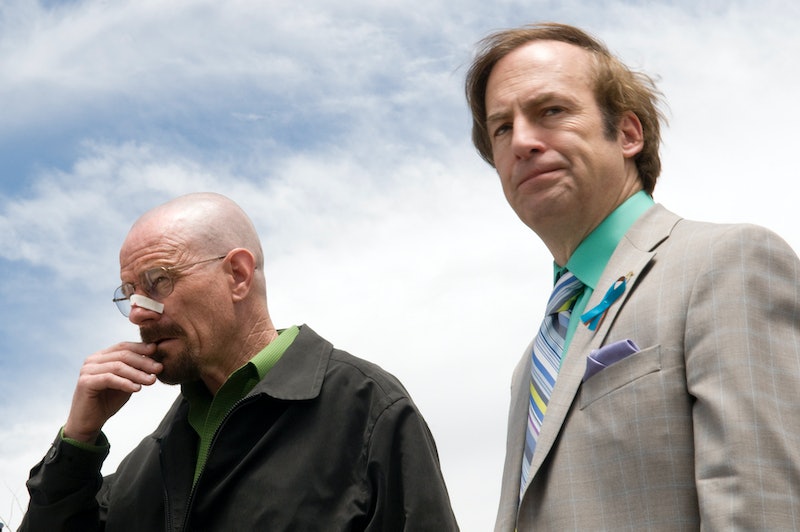 Since 2015, Bob Odenkirk has played his Breaking Bad character Saul Goodman in the AMC spinoff series Better Call Saul. While the show's fifth season is on the way in 2020, the more immediate question on everyone's minds is whether Saul Goodman is in Breaking Bad: El Camino.

Viewers have learned on Better Call that since everything that went down in the Breaking Bad finale, Saul has been attempting to keep a low profile by working as a manager at an Omaha Cinnabon. Going by the name Gene, the last thing he probably wants is another run-in with Jesse Pinkman (Aaron Paul), the focus of El Camino, but that's all the more reason Odenkirk should be part of the film.

Unfortunately, there's been no confirmation that Saul will appear in the movie. His name doesn't appear on IMDB's official cast list for El Camino, though to be fair, only five names do, so this doesn't necessarily mean Odenkirk isn't involved in the project.

In addition, Breaking Bad creator and El Camino writer and director Vince Gilligan — who also co-created Better Call Saul — told the Hollywood Reporter that 10 characters from the original series will appear in the movie, so who's to say Odenkirk isn't one of them?

It's easy to see how Saul's storyline could tie in with El Camino, which focuses on Jesse's life after his escape from the neo-Nazis who kidnapped and tortured him at the end of Breaking Bad. After all, Saul spends much of his life in Nebraska being paranoid at the thought of his past catching up with him. He's gone to such great lengths to keep his former identity and crimes under wraps, it would be pretty great to see him come face-to-face with the life he left behind by having a random run-in with Jesse.

Odenkirk himself is giving no hints on whether or not Saul might pop up in El Camino, telling the Hollywood Reporter's In Studio, "I don't know what people know and don't know. I find it hard to believe you don't know it was shot. They did it. You know what I mean? How is that a secret? But it is. They've done an amazing job of keeping it a secret."

He added in the August 2019 interview that he "can't wait to see" the movie since he'd "heard so many different things about it." While on the surface, that comment would point to Odenkirk being absent from the movie, it's not unlikely that he could be purposely misleading fans in order to keep his role a secret.

Even Paul is keeping mum on which familiar faces will be popping up in El Camino, simply telling the New York Times that he couldn't guarantee anything other than that he believes fans "will be really happy with what they see."

El Camino: A Breaking Bad Movie will certainly be bringing back plenty of the characters we know and love from the original series, but whether or not Odenkirk will be among them is something we'll just have to wait to find out.