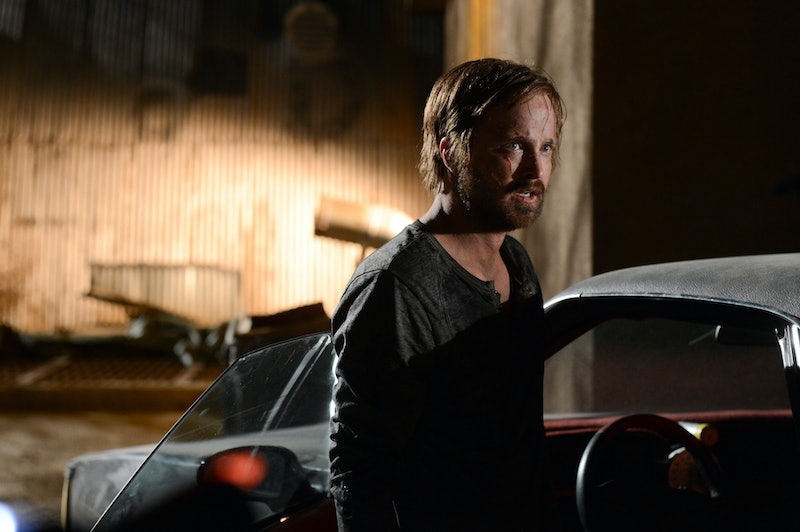 Although Breaking Bad is known to have one of the best series finales, ever, the 2019 Emmys revealed there's more to tell when it comes to Jesse Pinkman's story. In the new Breaking Bad movie trailer, fans get their first look at Aaron Paul reprising his beloved character six years after the finale. Breaking Bad left Jesse finally free when the finale aired and El Camino will show exactly what happened to Jesse after his triumphant escape when it premieres on Netflix and in select theaters on Oct. 11. Unfortunately, the trailer indicates that trouble still very much knows how to find Jesse Pinkman.

Bryan Cranston's Walter White seemingly died in the Breaking Bad finale after he helped Jesse escape Uncle Jack and Todd's Aryan Brotherhood gang. Jesse meanwhile hit the road in an El Camino ("camino" appropriately means "road" in Spanish), and it appeared that he had the chance to start a new life free of making and dealing meth — and free from Mr. White's sadistic hold on him. But just because Walt has died doesn't mean that Jesse's past crimes haven't followed him. While he was crying tears of happiness last time viewers saw him, the trailer has Jesse stuck in his car listening to the radio report that says how he's a person of interest in the shooting that occurred at the Aryan Brotherhood's hideout.

"In the wake of his dramatic escape from captivity, Jesse must come to terms with his past in order to forge some kind of future," Netflix's press release about El Camino stated. And while you might have hoped that Jesse would have some time to process the emotional trauma he just went through, he's stuck facing the major legal ramifications of Mr. White's final murder scene.

In the El Camino date announcement trailer, Skinny Pete was interrogated by the DEA about Jesse's whereabouts. He proclaimed, "No way am I helping you people put Jesse Pinkman back inside a cage." After everything Jesse went through in Breaking Bad, no viewer wants that for him. But as the trailer highlights — and Breaking Bad creator and El Camino writer and director Vince Gilligan hinted at — Jesse getting off scot-free post-Breaking Bad is far from guaranteed.

Gilligan told The Hollywood Reporter that he was inspired to make his highly secretive film sequel because he kept wondering about Jesse's fate. "I started thinking to myself, 'What happened to Jesse?' You see him driving away. And to my mind, he went off to a happy ending," Gilligan said. "But as the years progressed, I thought, 'What did that ending — let's just call it an ending, neither happy, nor sad — what did it look like?'" And although he was genuinely trying to help Jesse this time around, even in death, Walter White still has the ability to completely destroy Jesse's chances of peace.

Just like in Breaking Bad and the prequel series Better Call Saul, El Camino will show that actions have consequences. So while Jesse's ending is nowhere near as happy as fans have imaged it was over the last six years, El Camino should have just as poetic and fitting of an end as the series that inspired it — and there's cause for celebration in that.