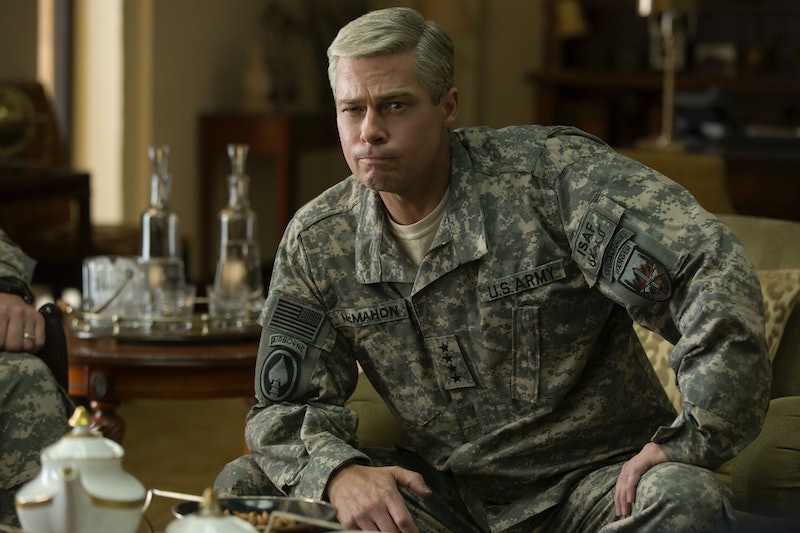 Francois Duhamel/Netflix
By Allie Gemmill
May 24, 2017

Netflix is diving into the satire genre headlong with War Machine. Adapted from the book The Operators by journalist Michael Hastings, War Machine follows U.S. General Glen McMahon in his quest to end the war in Afghanistan. Since the characters' names in War Machine have been changed from the true identities revealed in The Operators, who War Machine's Gen. McMahon is based on isn't a surefire thing, but it's widely believed that Brad Pitt's unscrupulous general is inspired by a man who worked closely with former President Barack Obama for a time.

Per The Washington Post's recent interview with Pitt about War Machine, it was revealed the real-life basis for Gen. McMahon is Gen. Stanley McChrystal. This information can be backed up by The Hollywood Reporter's discussion on why War Machine changed the names of their characters; in the article, it is acknowledged that McChrystal's name was changed to McMahon for legal reasons.

In a Rolling Stone profile written by Hastings in 2010, he claimed that despite the general having voted for Obama, the two failed to connect over handling the war: "McChrystal thought Obama looked 'uncomfortable and intimidated' by the roomful of military brass," Hastings wrote. Detailing McChrystal's brief alliance with Obama (from 2009-2010) and how both men reportedly sought to find a means to end the long-running war in Afghanistan, the profile makes it seem like there was a clash of wills from the beginning.

Hastings' Rolling Stone profile, titled, "The Runaway General: The Profile That Brought Down McChrystal," includes details about the alleged separate visions for this joint purpose to end the war. "McChrystal was determined to place his personal stamp on Afghanistan," the author claimed, "to use it as a laboratory for a controversial military strategy known as counterinsurgency."

Hastings went on to detail how Obama's enthusiasm may have waned over time, initially working to help McChrystal before backing down:

Obama announced that he would send an additional 30,000 troops to Afghanistan, almost as many as McChrystal had requested [...] Obama ha[d] quietly begun to back away from the deadline he set for withdrawing U.S. troops in July of next year. The president finds himself stuck in something even more insane than a quagmire: a quagmire he knowingly walked into, even though it's precisely the kind of gigantic, mind-numbing, multigenerational nation-building project he explicitly said he didn't want.

While War Machine still seems very much a story about McChrystal and his efforts to end the war in Afghanistan, we'll have to readjust to these newly-named characters, but it's a small price to pay for some high-quality satire.