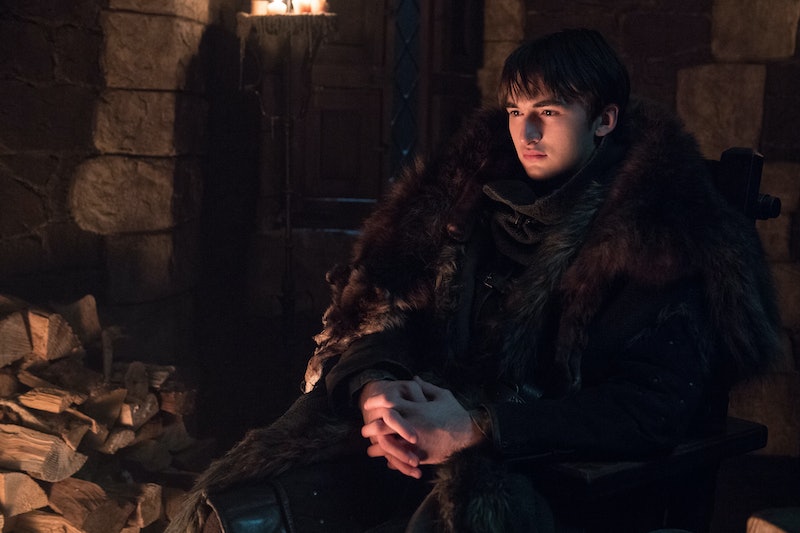 With his blank stares, monotone voice, and general lack of empathy about anything that's going on around him — it's no wonder some fans think Bran is already dead on Game of Thrones. Ever since he became the Three-Eyed Raven, it's like he became a totally different person. Is there any trace of the actual Bran Stark left? According to Isaac Hempstead Wright, who plays Bran, the answer is yes.

Prior to the actor giving interviews about the subject, fans had plenty of reasons to suspect that Bran was, for all intents and purposes, actually dead. In Season 7, Episode 4, Bran protested every time someone referred to him by his given name. When Littlefinger called him Lord Stark, Bran quickly answered, "I'm not Lord Stark." And when Meera called him Bran, he said, "I'm not, really. Not anymore. I remember what it felt like to be Brandon Stark, but I remember so much else now." Meera responded by saying, "You died in that cave."

It wasn't a literal death, however. It was more the death of Bran's personality. As the Three-Eyed Raven, he has the entirety of the world's knowledge in his brain. There's just not a lot of room for Bran left over. "There is a flicker of Bran left in him, but really, can you imagine putting the entire history of the universe, every single moment, every single second that ever existed in one person’s brain?" Hempstead Wright said in an interview with Making Game Of Thrones. "You’d think it would just short circuit. Bran just becomes this calm, zen character. He’s really like a human supercomputer."

Making room for the world's knowledge pushed Bran's personality out. "Bran has become a much smaller part of the character’s brain, when before 100 percent of his head was taken up with being Bran Stark. Now, that’s just one tiny file in a huge system," Hempstead Wright said in the same interview.

"He’s almost completely a different character. He acts utterly differently, and really any semblance of personality he used to have has gone ... I think it’s most shocking for Sansa and Arya to see what Bran is like, because they still have fundamentally the same character traits as they did when they were young: Arya is this spunky, fierce girl, and Sansa is this diplomatic lady. But Bran has definitely become somebody they wouldn’t recognize otherwise."

The actor added that portraying this dramatic change in his character was a challenge at first. "It was definitely difficult to get it right. I had a meeting with [showrunners] David [Benioff] and Dan [Weiss], and they wanted him to be quite monotone and agenda-less, but at the same time have a slight flair, so it wasn’t just like listening to a robot talk," Hempstead Wright said.

And, at the end of the day, Bran really isn't a robot. He may be a slightly less Bran version of himself, but Bran's in there somewhere. Hempstead Wright told Vanity Fair that this part of his character is magnified at Winterfell when he's surrounded by his family. "There’s still a bit of Bran Stark in Bran and when he’s at his home surrounded by people he knows. That will obviously be brought out a bit more. He hasn’t completely forgotten who he is, it’s just not as important to him anymore."

One of the best examples of Bran not completely being gone came at the end of the Season 8 premiere. Jaime Lannister finally arrived at Winterfell and Bran was sitting there, awaiting his return. The last time the two met, Jaime pushed Bran out of a window, paralyzing Bran's legs.

The unforgiving stare Bran gave Jaime in Season 8 illustrated to Jaime (and to viewers) that Bran, much like the north, remembers. He let Jaime sit in that guilt and awkwardness. Honestly, it was the best use of Bran's uncomfortable Three-Eyed Raven glares yet — and it demonstrated that Bran is alive and well inside there. He may be a smaller part of the Three-Eyed Raven, but he's still there enough to make Jaime feel bad for what happened when Bran was just a boy. So don't count this Stark as dead (just yet).