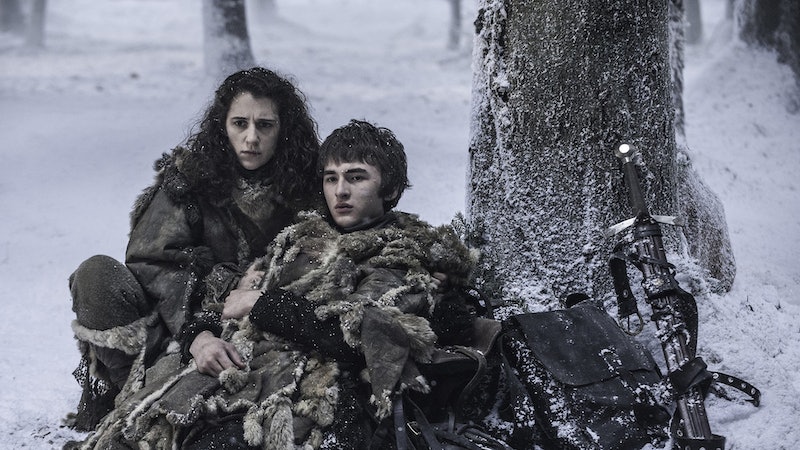 As the Three-Eyed-Raven, Bran Stark is one of the most mysterious characters in all of the Seven Kingdoms — and there's still one major mystery hanging over the heads of viewers as we head into the final season: Is Bran talking to the Mad King?

While the theory that Bran (Isaac Hempstead-Wright) caused the Aerys Targaryen — aka the Mad King — to go insane because of his greenseening ability has been floating around amongst Game of Thrones fans for some time, the Season 8 premiere featured a small moment that some theorists took as confirmation of the fact that the Mad King could hear Bran in his head. According to Reddit user NegativeKarmaSniifer, Ned (Sean Bean)'s reaction to hearing Bran's voice during a Season 6 greenseeing session proves that while people can hear him in the past, they can't hear him clearly or loudly. That was confirmed later in the season, when Bran's warging and greenseeing was revealed to be the source of Hodor's inability to say anything other than a mangled version of the phrase "hold the door."

Finally, near the end of the season, Bran had a vision of the entire history of Westeros, which included a glimpse of the Mad King himself, and his voice shouting "Burn them all." While many fans took that as confirmation that the Mad King went insane because of Bran's warnings about the White Walkers breaking through the wall, Reddit user mvmchugh shared that it was actually Bran's comment about waiting for "an old friend" in the Season 8 premiere that confirm that Bran has the ability to speak with the Mad King.

According to the Reddit user's theory, now that fans know that Bran can communicate with people in his visions, it implies that the Mad King's commands to "burn them all" could have been in reference to the White Walkers, and Bran telling Aerys that they were coming. "The Mad King was killed by Jaime Lannister (Nikolaj Coster-Waldau) when he tried to burn down all of Kings Landing," the user wrote.

The Mad King was killed by Jamie Lannister when he tried to burn down all of Kings Landing. When Bran is waiting in the courtyard at the end of S8E1 someone asks who he is waiting for & he replies "an old friend". The next person Bran sees is Jamie Lannister. What if Bran is referring to Jamie as an old friend because Jamie saved Kings Landing from the Mad King, who would not have been crazy had it not been for Bran?

That theory could be supported by the fact that Jaime, as the Kingslayer, was the last person to see Aerys alive, and hear his commands about burning. In Season 3, he tells Brienne that the Mad King's commands were a part of his plan have his pyromancer to burn all of King's Landing during Robert's Rebellion, but based on the way that Bran's message got twisted with Hodor, it now seems likely that Bran could have been attempting to warn the former king about the threat from North of the Wall.

Of course, Bran's description of Jaime as an "old friend" could simply be a reference to the pair's history — after all, Jamie pushed Bran out of the window in Season 1, which resulted in him becoming paralyzed and eventually developing his powers as the Three-Eyed Raven. But considering the fact that many fans believe that Bran Stark is the Night King, it might make sense that Bran's ability to speak with the Mad King via greenseeing played a major role in both the War for the Iron Throne and the War in the North.

Regardless of whether or not Bran has been speaking with Aegys Targaryen over the past few years, the Season 8 premiere made it clear that Bran's abilities will play a major role in bringing the fantasy sage to an end.