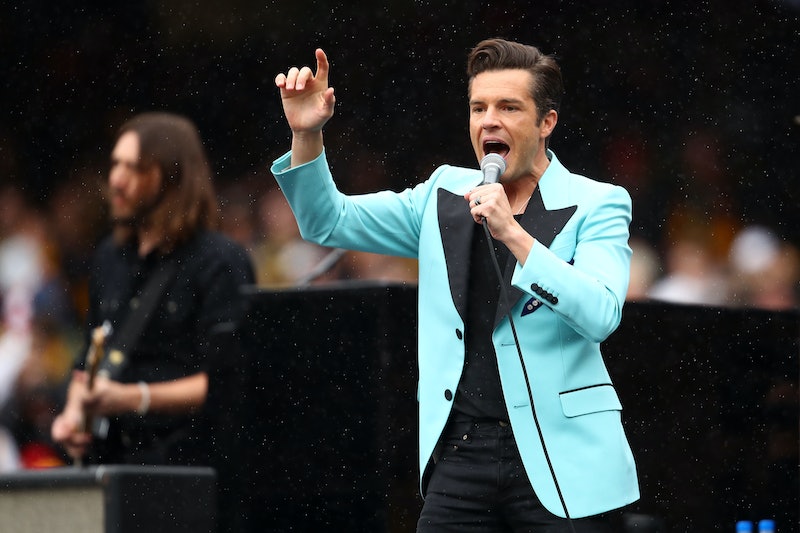 True story: I've always been obsessed with Brandon Flowers. The very first time I saw The Killers frontman performing live, I was struck by his incredible charisma and stage presence, and I fell a little bit in love. And it certainly doesn't hurt that Flowers is er, rather easy on the eyes shall we say. Naturally, the very first thing I googled was: 'Is Brandon Flowers married?' and I've got some bad news for fellow fans hoping he may one day fall in love with us.

Flowers has been married to Tana Mundkowsky since 2005, and the couple have three children together. And unfortunately, the pair seem so cute together and dedicated to one another, it's kind of hard to be mad about it.

Flowers and Mundkowsky met back when The Killers were a little known band, preparing to play their first gig. He was apparently looking for clothes for said gig in thrift store Buffalo Exchange, when Mundkowsky gave him her number. "Oh, I was never the type to give anyone my number,” he told Q magazine in 2017. “And from what I gather, she swears she isn’t like that either. But she had the guts that day.”

Lucky for him, as the pair have now been married for 14 years, and have three children: Ammon (10), Gunnar (eight) and Henry (six).

From the outside in, the pair look as though they have a healthy, happy relationship, and snippets from interviews Flowers has done reveal nothing but love between them. He told Q that once, when the pair were sorting through their things to move house, they both found something extremely sentimental from the first day they met: the piece of paper with Tana's phone number on, and the page from which is was ripped. “It’s so cool. Because you can put them back together. And they fit perfectly.”

“My wife and my kids are the centre of my universe. So when I’m home I’m totally devoted to them," he also told the publication.

However, things haven't always seemingly been smooth sailing for the Flowers family, making their experiences reflective of any normal, modern relationship. In 2015, Flowers ended up cancelling some of his solo tour dates in order to be with his wife, who was suffering with her mental health.

Flowers channelled his energy into songwriting, which he said helped him during this tough time:

“It helped me understand what she was going through because I could put words to it, wrap my head around it and really navigate it. A lot of relationships fall apart when these things happen. As a songwriter, I had to dissect it,” he said.

Several of The Killers' more recent songs, including Some Kind Of Love, mention Tana and her struggles, and act as a tribute to her. Now that's love.

The Killers are set to headline Glastonbury this year, alongside fellow musical legends The Cure, Janet Jackson, Stormzy, and Kyle Minogue. The Killers have not headlined the festival since 2007.

If you or someone you know is affected by the issues mentioned in this piece, you can contact mental health charity Mind on 0300 123 3393.