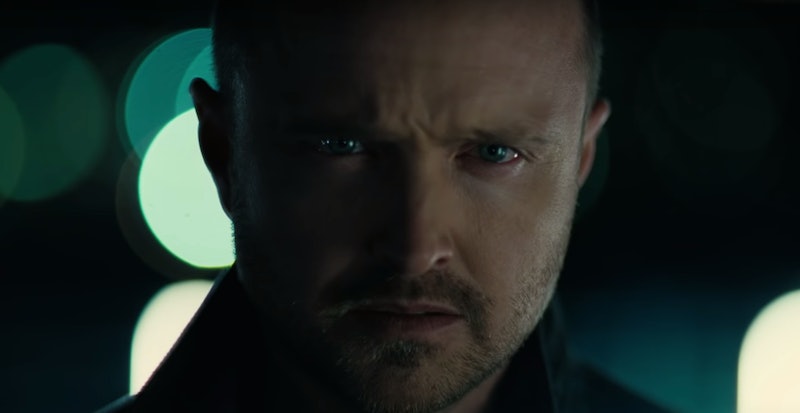 In Westworld Season 1, Bernard was revealed to be a host made by Ford. And at the end of Season 2, Stubbs was also revealed to be a host. So it's not at all a stretch to think that new character Caleb, too, could be a host. Perhaps we're now just as paranoid as Liam's "we're living in a simulation" friend, but there are a number of small references that hint the army vet isn't as human as he appears to be. Let's assess.

The first hint that Caleb may be a host is the fact that his morning sequence — asleep in darkness, and then eyes opening with light streaming onto his face – mirrors the way Dolores used to wake up every time she was killed, reset, and put back into the park. The way he brushes his teeth, goes to work, talks to Francis, visits his mom, works the Rico app, and then goes home all feels very rote too, like a host loop he can't get unstuck from.

We don't know much about Caleb and Francis' time in the military, but Caleb does mention their unit was run by "algorithms." There's also a reference to him having an implant, which could be something installed by the military or just the Incite tech everyone else seems to have. Most noteworthy is the lingering impact Francis' death has on Caleb. Is it possible that Francis' death is Caleb's cornerstone, in the same way Bernard's was the death of his son?

When Caleb goes to visit his mom at the expensive care facility she's living in, she tells him, "you're not my son." This may simply tell us that she has Alzheimer's, but it could also signify her realizing that this Caleb isn't the same person she used to know.

Shot In the Head?

When Caleb delivers the kit meant to kill Dolores to Connells, one of his lackeys points a gun at Caleb's head. "It's not the first time I've had a gun pointed at me," Caleb responds. When the guy then asks if Caleb wants to get shot in the head for the first time, Caleb says, "Someone else beat you to that too."

How does someone get shot in the head and survive? Sure, technology has become more advanced in this futuristic world, but is it possible Caleb died with Francis and was brought back as a host? Was it Dolores who brought him back, and him finding her in the tunnel at the end was actually exactly what she'd programmed him to do?

These all feel like decently compelling clues, but they could just as well be red herrings, particularly considering the show has already exhausted this kind of twist. Caleb's mom could just have Alzheimer's, and his life may feel repetitive and meaningless because he's suffering from PTSD and depression. Him not being able to get over Francis is just what happens during the grieving period.

Above all, the biggest wrench in this theory is the fact that no one except for Ford and Dolores has been able to successfully create host replicas of humans; we saw Delos attempt and fail numerous times with James Delos. While it's possible Dolores created Caleb, he's low income and has no high-net worth tech connections that she could leverage. Why would she be interested in Caleb, when she sees humans merely as transactional tools? Furthermore, Dolores seems to be building copies based on the info she learned in the Westworld library. There's almost no way Caleb would've been able to afford — or would want to go on — a Westworld vacation.

If Caleb does end up being human, he would represent one of the few genuinely good humans on the show. Dolores doesn't see humanity as worth saving right now, but meeting somebody like Caleb, who prioritizes helping others over his own suffering, may be enough to make her think twice about whatever shady plan she has in store.

More like this
All The Clues Zach & Christina Are Together After 'The Bachelor'
By Grace Wehniainen
Mack & Domynique Reportedly Had An "Epic" Breakup On 'Married At First Sight'
By Brad Witter
All The Clues Clint & Gina Aren’t Still Together After 'MAFS' Season 16
By Brad Witter
Netflix Shut Down 'Bridgerton' S3 Rumours About A “Very Dark” Storyline
By Bustle
Get Even More From Bustle — Sign Up For The Newsletter
From hair trends to relationship advice, our daily newsletter has everything you need to sound like a person who’s on TikTok, even if you aren’t.