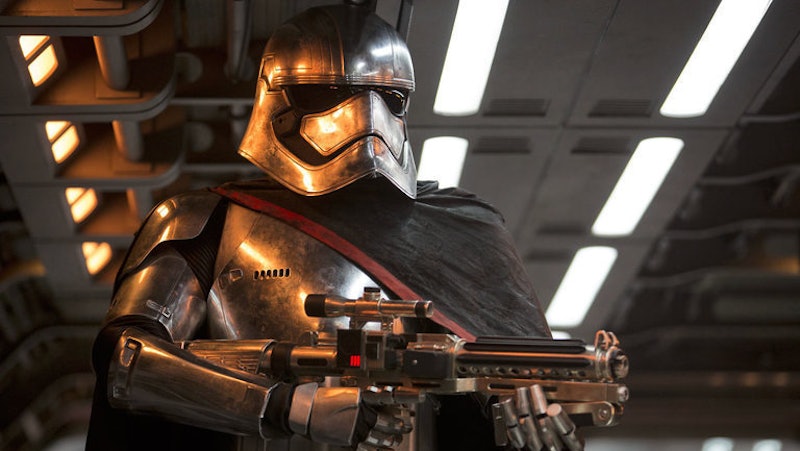 Spoilers ahead for Star Wars: The Last Jedi. Of all the characters introduced in the new Star Wars trilogy that began with 2015's The Force Awakens, perhaps none have been more frustratingly elusive than Gwendoline Christie's Captain Phasma. The chrome-armored leader of the First Order stormtroopers looks awesome but had little to do in her introductory film, and unfortunately is given even less to do in The Last Jedi, seemingly falling to her death at the conclusion of her lone scene. But is the character really dead, or is Captain Phasma in Star Wars: Episode 9?

Her fate remains up in the air at this point. As far as fans know, Phasma is dead, but with her presumed death technically occurring off-screen, there's a chance that she survived. During the scene in question, Phasma gets into a battle with Finn after the ship they're on sustains significant damage thanks to Admiral Holdo's light speed kamikaze attack. The two engage in a duel and Finn manages to gain the upper hand, smashing in Phasma's helmet and revealing a Brienne-like eye underneath. At this point, Phasma tells the former stormtrooper that he's always been scum, to which he replies "rebel scum" as the floor collapses and Phasma falls into flames below. It's a classic Star Wars-esque scene for sure, as fans have seen characters like Han Solo and Emperor Palpatine make similarly long falls in their iconic death scenes. But on the other side of the coin, they have all seen characters like Luke Skywalker and Darth Maul take lengthy cavernous falls and live — the latter after having been cut in half — so truly anything is possible in Star Wars.

Director Rian Johnson said as much recently to EW's Anthony Breznican, leaving the door open for Phasma's possible return. "Phasma is the Kenny from South Park of this series," Johnson said jokingly, referencing the animated sitcom character who is routinely killed only to show up alive and well in the following episode. Mark Hamill, who plays Luke Skywalker, also thinks Phasma could be alive, and even posits a theory as to how she could have survived. "I think she’s got to survive," he told EW. "She falls through the flames and lands on a big pile of rubbish." Finally, Christie herself apparently wants to come back and has her own idea of how that could happen, according to costume designer Michael Kaplan. "Gwendoline has it all figured out how she wants to come back," he told EW.

More evidence for a possible return for Phasma can be found in how she returned in The Last Jedi itself. The last fans saw of her in The Force Awakens, she was dumped down a garbage compactor on Starkiller Base, which was blown up shortly thereafter, so it definitely wasn't clear if she even survived that. Even Johnson had to change his original Last Jedi script to account for her unlikely survival after that event. "When I was first writing, I got really excited because I’d written a line where [Phasma] said, 'I was stuck in that garbage thing for three weeks,' and [Finn] gives her a look and says, 'What did you eat?'" Johnson told io9's Germain Lussier. "Then I realized, no, [Starkiller Base] blew up. If she was in the garbage chute, that means she blew up with the planet."

So since Captain Phasma has escaped certain death once already, there's a chance she could do so again. And fans are hopeful that she does, because as cool as the character looks and as great as Gwendoline Christie is, Phasma still hasn't really done anything. In her two appearances she's been bested by a former stormtrooper janitor while giving fans little reason to take her seriously as a villain. She's like Boba Fett turned up to 11: Loads of potential but largely ineffective and disposed of in comic fashion. So here's hoping that Phasma returns for Episode IX and finally gets to kick some butt.