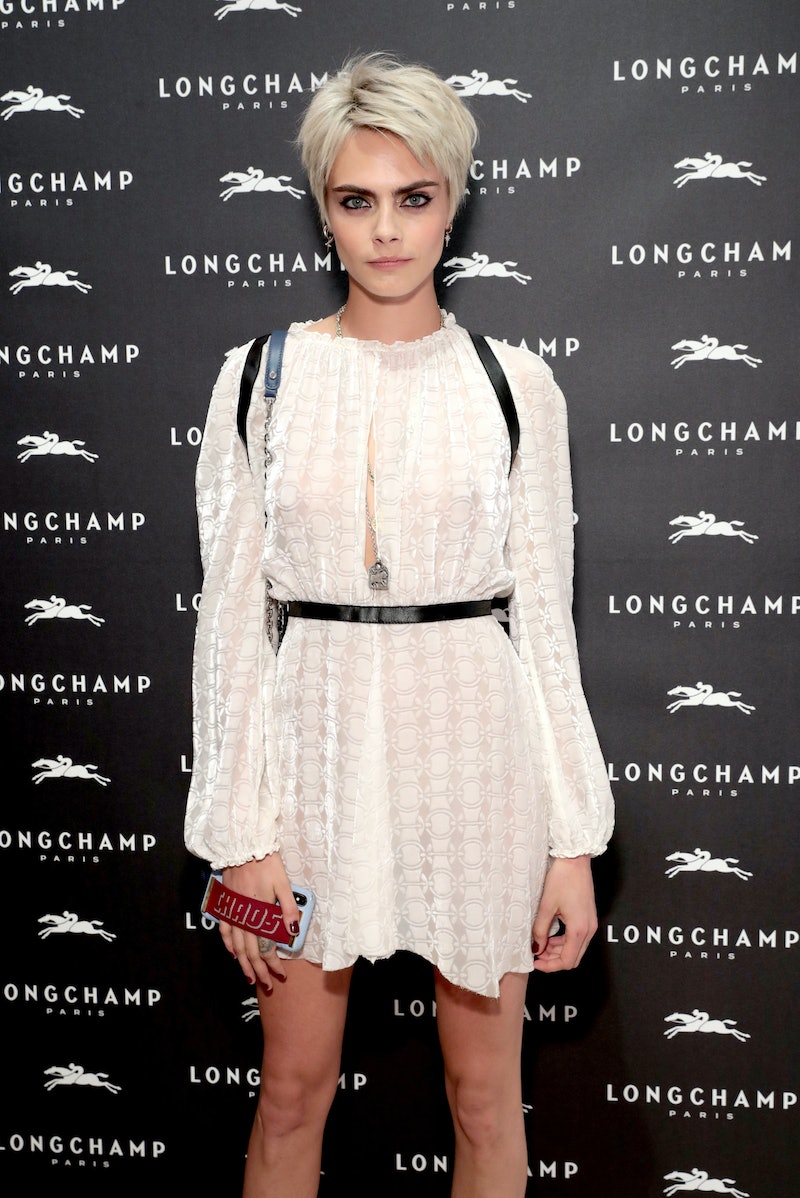 There's a certain hairstyle taking over this summer season, and it seems to be cropping up on every It-Girl's head. The newest celeb to debut the sassy cut is everyone's favorite model-turned actress, where Cara Delevingne debuted a blunt bob for a new Puma campaign. She's not alone when it comes to sporting a chin-grazing cut, though, where everyone from Emilia Clarke to Emma Roberts lost their length just in time for the hot weather.

Delevingne is known for her pixie cuts and shaved head, so in her case it's not so much that she got rid of her length but added some more on. When it comes to hair, the actress is fearless — she's dabbled in about every style imaginable, and then some. She came out onto a red carpet wearing a bald, silver painted head for the 2017 Met Gala, sported pastel hued buzz cuts, and even once had long, finger-tousled blonde hair. When it comes to experimenting, Delevingne doesn't have much fear. But it looks like she might be growing out her locks once again, or at least for the sake of a campaign shoot.

The look was debuted by Delevingne's hairstylist, Mara Roszak, who posted a sneak peek of the Puma campaign onto her Instagram. She explained how it was her newest collab with the model, writing, "New work and NEW HAIR with this beauty #CaraDelevingne for @puma."

The photo reveals a new athleisure sportswear line, along with Delevingne wearing her hair parted in the middle and styled wet and wavy, with her ends touching her chin. While very cute, this isn't Delevingne's actual hair since she's still in the growing-out stages of a pixie, but the campaign photo does show how versatile the short cut can be.

Roszak is a celbrity hairstylist with a salon tucked away into West Hollywood called Mare Salon, which is often frequented by A-listers. You might know it as the salon bringing the perm back this year, where a number of celebs booked appointments there the last couple of months to come out with naturally wavy hair. Emma Stone and her friend both got their hair coiled by Roszak, followed by Hart of Dixie actress Jamie King, and Mozart in the Jungle actress Lola Kirke.

As for transforming Delevingne's look, this wavy, choppy bob isn't Roszak's first collaboration with the actress. In the same Instagram post, she shared a gallery of some of her favorite looks she made with Delevingne, showing just how versatile and eclectic her aesthetic is.

From a cemented 1920s finger-wave crop, to a side part snake braid, to a silver foiled pixie, the looks ran the gamut.

But while she's sported everything from tattoo undercuts to loose and romantic braids, Delevingne isn't the first celebrity to try out the bob this summer. In fact, she has joined a long list of women with chin-grazing cuts.

Emma Roberts recently revealed a "hairline bob," where the ends hit around her cheekbones, going shorter than most. Her hairstylist, Chris McMillan, shared that the look was surprisingly low-maintenance, where one would only need mousse and finger tousles to style it.

Then Emilia Clarke took the big chop as well, but her transformation was more out of necessity then fashion. Being a platinum blonde, she found that she needed regular trims to get on top of the split ends that were frying from bleach, and so she opted for a blunt bob.

"In other news this FABULOUS new bob is the chicest way to style out some burnt-out mother of dragons split ends," she wrote on her Instagram, posting a video of her playing with her short hair.

Seeing all these stylish women with blunt looks this season definitely makes a person want to try out the bold cut themselves.