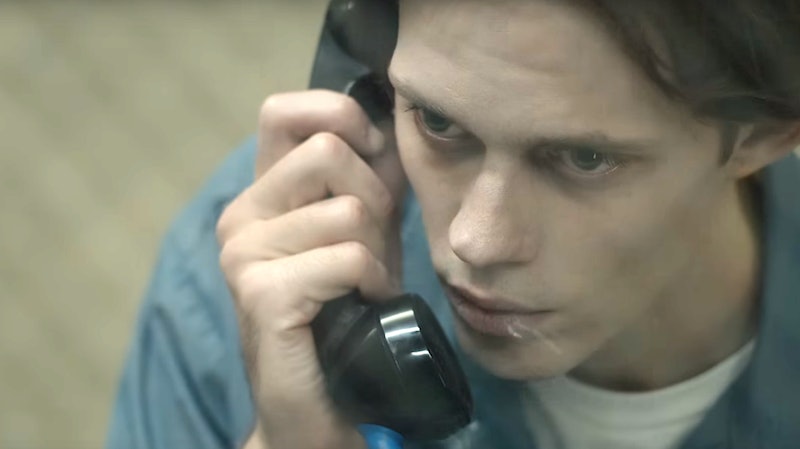 Quit digging behind that Rita Hayworth poster, because the newly released Castle Rock Super Bowl 2018 teaser is a Stephen King fan's dream. Besides being stacked full of other Easter Eggs (more on those in a moment), there's one in particular that may have you thinking, is Castle Rock a Shawshank Redemption spin-off? As it turns out, the answer is a little more complicated than a simple yes or no.

At the very beginning of the trailer, André Holland's character tells a character named Alan Pangborn (the sheriff from Needful Things) that he's returned home to Castle Rock, Maine, after receiving a mysterious phone call from Shawshank prison. A front-page newspaper headline suggests the phone call may have been regarding a suicide, which involved a "warden's death." A little later we also see Bill Skarsgård's character, a Shawshank inmate, talking to Holland. In fact, it's possible that he could have been the one who lured him back to town.

What's clear, however, is that Shawshank is simply a small part of a bigger story. Though it looks to be the King story that might spur the rest of the series into action, it certainly doesn't look to be the main one. And though Shawshank is featured in Castle Rock, it looks like the prison, and the King story about it, will serve only as a reference point for the narrative that follows on from it. And that makes a whole lot of sense once you know the basics of what the show is promising.

Though very few details have been revealed about the J.J. Abrams-produced series, fans do know that Castle Rock will be set in the "Stephen King multiverse." As such, the show will weave between several of King's most beloved stories and characters to create an original tale that unites the entire King canon.

As fans of the horror writer will already be aware, Castle Rock, Maine, is the setting for a number of King's stories including Cujo, Needful Things, and The Dead Zone. It's also referenced in over a dozen more of his works such as It, Gerald's Game, Pet Semetary, and Rita Hayworth And The Shawshank Redemption — King's short story from which The Shawshank Redemption film was adapted. For that reason, Castle Rock is the perfect setting for the story as it represents one of the many tangible threads that connects King's books to one another.

But it also means that Castle Rock is a spin-off of King's overall canon, rather than of any one particular story. And if you pay close enough attention, some of the Easter Eggs in the Castle Rock teaser suggest that all new characters and stories in the series may be happening alongside existing ones that will be familiar to King fans.

There are foreboding shots of drains and a bloody sink that feel like direct references to It.

Then we get a glimpse of that dog trope that King has used in works like Cujo, Gerald's Game, and Pet Semetary. There's no way that this Rottweiler is going to be a good boy — even if he might look like one.

Adding to the multiverse idea is the meta casting of Sissy Spacek, Melanie Lynskey, and Skarsgård, who have all starred in adaptations of King's work before (Carrie, Rose Red, and It, respectively).

Meanwhile, the first trailer from the show revealed Holland's character watching what looked to be a death row inmate receiving a lethal injection and was evocative of King's death row stories like The Green Mile and The Bad Little Kid.

And just in case you were forgetting about Shawshank, the final shot of that trailer also showed a car sinking into water while baring a bumper from the correctional facility. Mysterious.

Castle Rock is due to premiere on Hulu at some point over the summer. And, judging from this trailer, Shawshank prison will be a prominent part of whatever evil unfurls in the series.