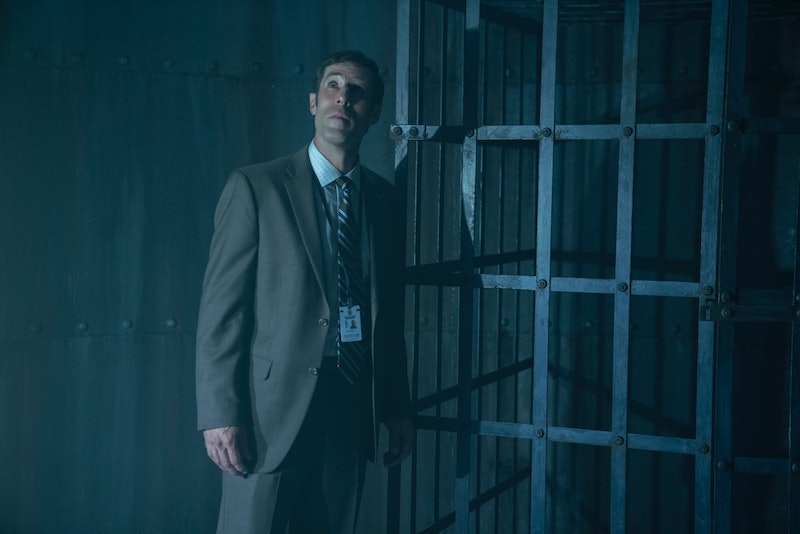 Hulu's Castle Rock promises to be a dream come true for Stephen King fans, using King's wide array of novels and short stories as inspiration for an original story. It doesn't take a superfan to notice the show's most obvious King reference — the show connects Shawshank Penitentiary to Castle Rock's titular town. As exciting as it is to see a television show utilize the setting of The Shawshank Redemption, its inclusion may raise some questions for fans who are only familiar with Shawshank through the 1994 film.

The town of Castle Rock has been connected to Shawshank State Prison in the past, but in King's stories they both seemed to be two separate locations in the state of Maine. The show Castle Rock places the two locations together. Co-creator Sam Shaw told io9 that the town is a "bedroom community in the shadow of Shawshank" in the show. This placement is crucial to the series, as the inclusion of Shawshank State Prison isn't just small detail or an Easter egg — the facility is going to play a major role in Castle Rock, premiering July 25.

While Stephen King started using Castle Rock as a setting almost two decades ago — its first appearance was in the 1979 novel The Dead Zone — the show updates the town to emulate how other small towns in America may look in 2018. Shaw explained, "It’s a town that’s basically been thinned out in its population, [with] closed-down storefronts [and] a mill that has closed down, and now the main business in the town is incarceration," per io9.

It appears that Shawshank Prison is not just important to the show Castle Rock, but has also defined the town itself. Shaw explains that the modern setting will also affect the management of Shawshank. Dustin Thomason revealed to io9 that the writers hope to use the setting of Shawshank to explore "what it would look like to tell a story about the privatization of a prison, and what the economic pressures on a prison are once a big corporation swallows it up."

While the idea of bringing Shawshank into the 21st century is appealing, it can also represent the threat of a familiar horror to Stephen King fans: a poor adaptation. Melanie Lynskey, who plays Castle Rock real estate agent Molly Strand, spoke on that issue to Collider. "I’m also a Stephen King fan, and there is always that thing when you love a book and you’re like, 'Please get it right!'" ... There are a lot of great Stephen King movies, but when they don’t get it right, that’s really unfortunate."

However, King fans may have a hard time denying that the show honors King's legacy since the author himself is involved. Shaw described the original story of Castle Rock as "a story that felt like a song written in the key of Stephen King," in an interview with TVLine, and described King's role as "kind of like Charlie from Charlie’s Angels" during the development of the series. He'd check in to sign off on the use of his characters and settings. So though Shawshank State Prison may look different than fans are used to, but it is still King's Shawshank.

Other shows have explored the intersection of prison and profit, from HBO's Oz to Netflix's Orange Is The New Black, but Castle Rock could be the first series to focus on how people hope to get rich off of a prison that is almost certainly haunted. The Castle Rock trailer features allusions and references to Stephen King novels Cujo and It, with many more references certain to be present in the show itself. However, it seems that while the show owes a great deal to King's body of work, the writers are hoping to tell their own tale.

Thomason revealed to io9 that the writers "had to be selective about where we were drawing on characters, themes, and ideas from the books." He continued, W"e are great fans of [King’s] crime and punishment [stories] ... stories that deal with death row and the sort of real-world monster of incarceration. For the most part, the references that we chose felt organic to that story."

Castle Rock is undeniably created in the image of King's tales, but don't expect his more fantastical characters like The Stand's Randall Flagg or The Dark Tower's Roland Deschain to show up anytime soon. Castle Rock is using Shawshank to explore some horrors that aren't too far from the terrors of the real world, while still sneaking some supernatural horrors in as well.