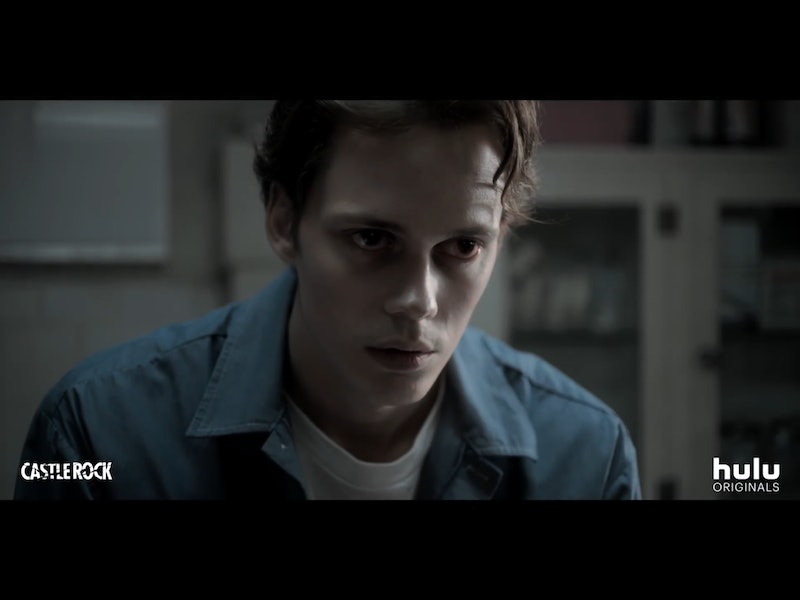 On Tuesday, July 10, the official look into Stephen King's Castle Rock is finally arrived. The Castle Rock trailer has so many Stephen King Easter eggs for fans to spot. Make no mistake about it — if you were one of the fans enthralled by the many Easter Eggs dropped in the Super Bowl trailer, you were totally ahead of the game. King's multiverse musings are also everpresent in the newest trailer, proving that Hulu's Castle Rock will be a melting pot of all things both longtime and casual fans adore about the horror writer's repertoire.

Just as so many of King's previous stories, Castle Rock will take place in the popular Maine destination and will be packed with a plethora of the darkest twists and turns — seemingly starting with the appearance of a suspicious and unknown inmate who made his way to the inner workings of Shawshank Prison. The July 10 trailer brings to life a lot of the same King references in the previously released teaser trailer, further proving that the upcoming psychological-horror anthology series is going to be a nod to all of King's most daring hits.

As if having the plot's most notable location, Shawshank Prison, bear a name similar to that of King's 1994 hit The Shawshank Redemption wasn't striking enough, the presence of the 1974 Carrie's Sissy Spacek most definitely will. The talented actor will seemingly be a staple to the cast, and interestingly enough, can be spotted sharing a little screen time with another subject familiar to King's fanbase — a Rottweiler that is eerily reminiscent to the terrifying attack dog widely known as Cujo.

Starring in King's newest addition to the horror genre, Bill Skarsgård, who is slated to wear the mask of It in Chapter 2, set for a 2019 release, plays the role of the mysterious inmate, seemingly there to support the town's creepiness and deliver quite a few frights to viewers. Skarsgård's presence is also accompanied with a few other nods to the It franchise, like that of the dripping tub collecting water and blood, "Juniper Hill Asylum" draped across an iron awning, and, though subtle, the balloons donning the "open house" sign.

Along with Spacek and Skarsgård, Castle Rock rounds out its leading cast with André Holland, from Moonlight, Melanie Lynskey, from Two and a Half Men, Jane Levy, best known for her starring role in ABC's Suburgatory, and legendary actor Scott Glenn.

As you can probably already tell, the official Castle Rock trailer has caused quite the stir amongst fans, and so, a lot of them took to Twitter to share a mixed bag of reactions.

For the most part, fans seem to be totally thrilled and frightened by the Castle Rock preview. The trailer showcases some of the most scariest moments from King's repertoire, and together with J.J. Abram's by his side, the newest Hulu horror series is bound to uphold the writer's torch proudly. What's even scarier than seeing clips of a lot of King's fondest moments compiled into one trailer is knowing that this preview is only the beginning. Besides all of the Easter Eggs dropped in the trailer, there aren't too many other spoilers floating around the internet — hinting that what King's Castle Rock has in store for the audience is going to exceed a lot of the imaginations of even the most horror genre-enthused.

Start assembling those watch parties if you haven't already, because King and Abram's Hulu masterpiece drops on the platform July 25. And by the looks of this terrifying trailer, Castle Rock isn't a series that one should watch alone. You'll totally need another, supportive, arm to sink those finger nails into, and an additional set of eyes to catch the possible nods to other King classics that you may miss while covering yours.