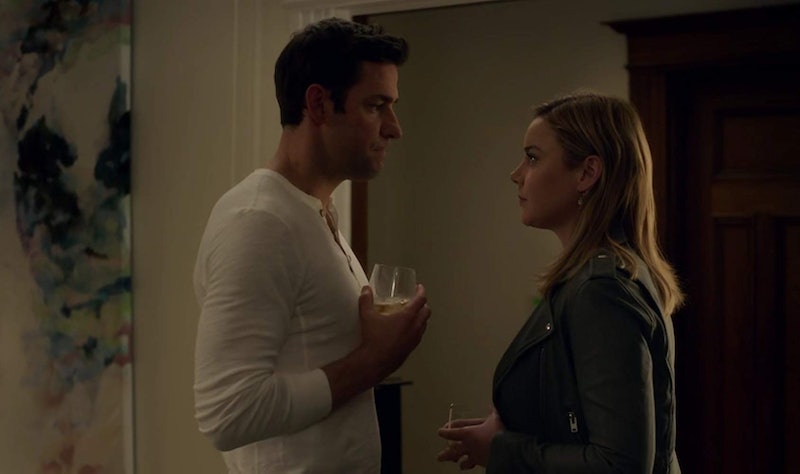 When Season 2 of Jack Ryan dropped on Amazon on Oct. 31, fans immediately noticed something was missing: Jack's (John Krasinski) partner Cathy Mueller, played by Abbie Cornish, was nowhere to be seen. While the first episode of the second season showed Jack sleeping with Harriet Baumann (Noomi Rapace), implying he's parted ways with Cathy, that still doesn't explain where the character is gone and why she hasn't been seen in Season 2.

Cathy's absence also signifies a real departure from the source material, with the Tom Clancy novels Jack Ryan is based on having its eponymous character actually marrying Cathy and having four kids with her. Either this development is yet to come in Season 3, which has already been greenlit, or the showrunners are going in a different direction entirely.

While Jack and Cathy's relationship was tumultuous and left on less than positive terms at the end of Season 1 after she discovered he was lying to her about being a CIA agent, the fact that James Greer (Wendell Pierce) came to her aid during the attack on President Pickett (Michael Gaston) at Cathy's hospital in the season finale set her up for a Season 2 return. In reality, not only is the surgeon missing from the new episodes, her name isn't so much as mentioned by Jack or anyone else.

Of course, Cathy's absence could largely be down to Cornish's busy acting schedule. According to her IMDB page, she's currently appearing in Secret Bridesmaids' Business, a six-episode Australian mini-series in which a seemingly perfect wedding suddenly turns dangerous as dark secrets begin to unfold. She's also just completed filming on The Virtuoso alongside Anthony Hopkins.

It's possible that these projects could have kept her out of production on Jack Ryan's second season, but given what a pivotal role she played in the first, that's unfortunate as it's created a bit of incongruity this season.

Cornish's departure from Jack Ryan was never officially announced, meaning the door seems open for her to return in Season 3 and beyond. Of course, that doesn't address her unexplained absence this season, when it would have been easy enough for Jack or even James to throw out a one-line explanation for why she's nowhere to be seen. The fact that they haven't means that reintroducing her could be a little awkward, but Cathy was such a big character both in Season 1 and in Clancy's novels that it would feel wrong not to see her again in future.

More like this
Every 'That '70s Show' Character Who Returned For The Netflix Spinoff
By Grace Wehniainen
Netflix Shut Down 'Bridgerton' S3 Rumours About A “Very Dark” Storyline
By Bustle
Shonda Rhimes Responded To The Surprise Exit Of A Day 1 'Grey's Anatomy' Figure
By Grace Wehniainen
'Succession' Season 4 Will Be An "Absolute Banger" According To Cousin Greg
By Bustle Staff
Get Even More From Bustle — Sign Up For The Newsletter
From hair trends to relationship advice, our daily newsletter has everything you need to sound like a person who’s on TikTok, even if you aren’t.