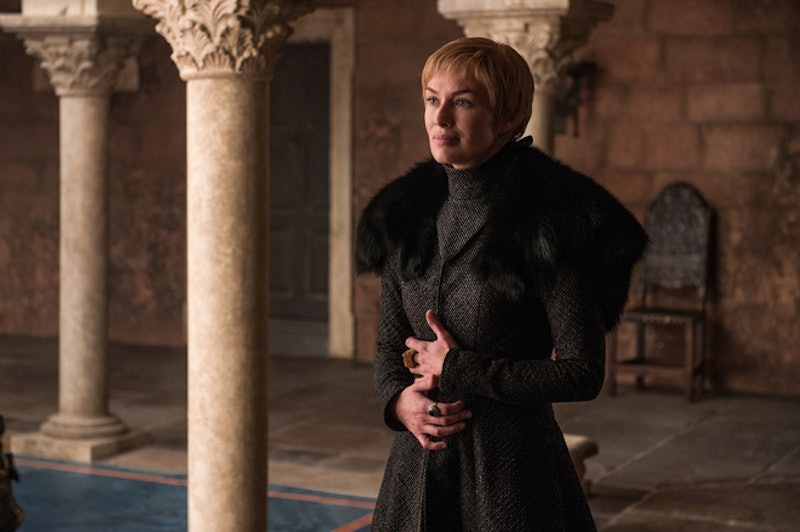 You may be still decompressing from the Game of Thrones Season 7 finale but it is now time to move forward and theorize wildly about what could possibly be in store for us next season. After all, this particular finale left fans with so many questions and one hell of a structural failure in that wall. Now that the Night King has breached the North and Cersei has decided not to join Jon and Dany against his army of the dead, will Cersei become the Night Queen on Game of Thrones?

This may sound kind of crazy at first, but it has some really interesting ties to real legend and subtle hints in the series. When we last saw Cersei, she was watching Jamie leave her to join the fight against the Night King's army. She is now the sole Lannister at home, is supposedly pregnant with Jamie's child and is more power-hungry than ever. There are some variables here that could contribute to her becoming the Night Queen.

First of all, she officially isn't fighting against the Night King and the wights. Of course, this doesn't automatically mean that she is fighting with them but it definitely means that she isn't on the right side and could potentially see the benefit in fighting on Team Undead. After all, they have a most massive army and have the special ability to create millions more whenever they need it, which is something that could appeal to Cersei's darker instincts.

The other piece to this theory was materializing even before this season began. One of the promos that HBO released for the season shows Cersei sitting down on the Iron Throne and breathing out a puff of frosty, cold air. The camera then seamlessly fades into the eye of what looks like the Night King. This could certainly have been pointing to the fact that Winter has officially come but I believe now that it is foreshadowing the connection between Cersei and the White Walkers. Couple this with the vision Dany had way back in Season 2 that showed her walking through the ruins of the Red Keep, that was covered completely in snow, and I think we have some seriously relevant clues here that Cersei is going to be a Night Queen.

The logistics are relatively simple for this to happen. Cersei would need to die and become reanimated by the Night King, which could happen through childbirth or by a valonqar murdering her, like the prophecy from Maggy The Frog states. Since the army of the dead have already breached the wall and are moving at a pretty good clip, Dany's vision of the Red Keep in snowy ruins could potentially happen, leading to Cersei joining the ultra bad guys.

Of course, all of this wouldn't mean anything unless there actually is mention of a Night Queen in the series' legend. Luckily, the Night Queen isn't something fans just conjured into fruition, it actually existed in George R. R. Martin's history of Westeros. According to the tale, the 13th Commander of the Night Watch fell in love with a rather chilly woman who had bright blue eyes. He took his new bride behind the wall and together they ruled over the brothers of the Night's Watch as the Night Queen and King.

Cersei is gearing up for something and it could be her big demise. Unfortunately, we have a long time to wait before fans get to see what happens.

More like this
'GoT' Star Emilia Clarke Says She "Just Can't" Watch 'House Of The Dragon'
By Brad Witter
Netflix Shut Down 'Bridgerton' S3 Rumours About A “Very Dark” Storyline
By Bustle
'The Last Of Us' Has Officially Been Renewed For Season 2
By Darshita Goyal
This 'Gossip Girl' Wardrobe Error Has Gone Viral On TikTok
By Alyssa Lapid
Get Even More From Bustle — Sign Up For The Newsletter
From hair trends to relationship advice, our daily newsletter has everything you need to sound like a person who’s on TikTok, even if you aren’t.