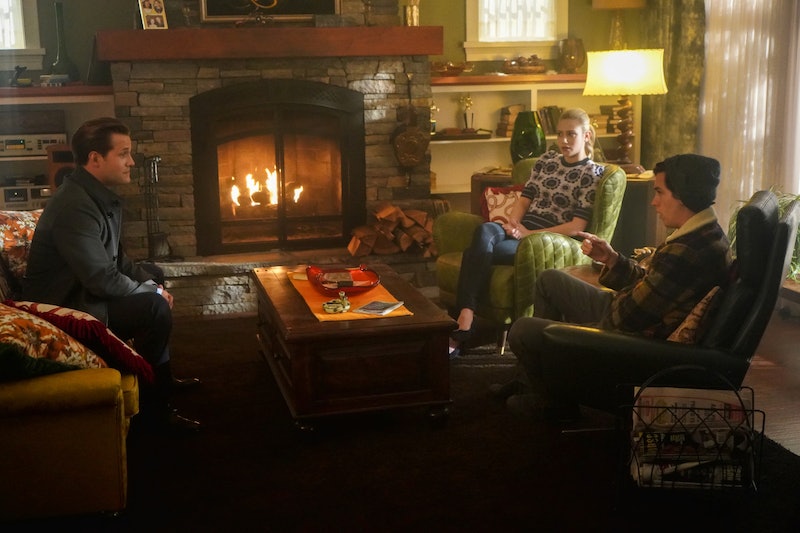 Spoilers ahead for Episode 6 of Riverdale Season 4. Because Charles and Betty share the "serial killer gene," she feels both bonded to and wary of her half-brother. And she has good reason to be conflicted: not only has Charles been spying on her, it's revealed in the Nov. 13 episode that he's working with Chic — and in love with him. So what, exactly, is this guy's deal? Is he good? Bad? What are he and Chic planning? Is he even Betty's real brother?

Whatever he's up to, it doesn't seem good. When Betty visits Chic in prison, he claims that Charles stabbed someone with scissors while he was high on jingle jangle. Betty, rightfully suspicious of a man who falsely posed as her long-lost brother, then makes Charles take a polygraph test, during which he reveals that he's an addict and goes to weekly meetings. He also denies stabbing anyone, instead saying, "I came home from the grocery store one day and found a dead man in our bed. Chic, covered in his blood. Some trick that he had brought home. My instincts took over. I dissolved the body with lyme in the bathroom tub, threw out the sheets, scrubbed the room clean with bleach." He claimed that he left Chic after that and started over again, but as we know, that isn't true.

So, not only did Charles tap Betty's phone and lie to her face, he's in a relationship with a known murderer. If you can remember all the way back to Season 2, Chic previously killed a man in the Cooper home, which Alice said was because the man was trying to hurt her. Afterward, FP buried the body while Betty helped her mother clean up the mess. In the Oct. 13 episode, Chic calls the FBI and claims it was Alice who killed the man, not him. However, it's then revealed that this was just part of Chic and Charles' plan. They likely wanted to learn where the man's body was buried — which Charles did when helped FP move the corpse.

Unfortunately, Betty doesn't know any of this, and after the polygraph test, she becomes significantly less suspicious of Charles. But hopefully she won't let her guard down completely. It's unclear which side Charles is on at this point, but he certainly can't be trusted.