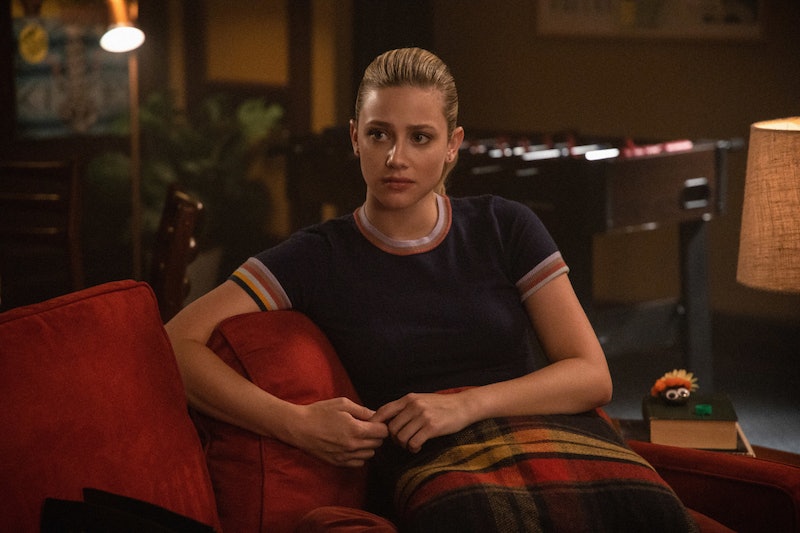 Spoilers ahead for Episode 4 Riverdale Season 4. Ever since the whole Chic-pretending-to-be-Betty's-supposedly-dead-brother debacle, Betty (and Riverdale fans) have been understandably wary of Charles, who was revealed to be alive (and an FBI agent??) at the end of Season 3. However, in the Oct. 30 episode, Betty concludes he "might be the real deal." What she doesn't know is that he tapped her phone and was listening to her say that, and what we don't know is why Charles is spying on Betty at all. Is anyone who they say they are in this town?

As was established when Chic showed up, Charles is Betty's half-brother, born to a teenage Alice and Jughead's dad FP. He sees something special in Betty, and after working with her to take down the Farm, encourages her to join the junior FBI program. Fortunately, those same instincts that would make Betty a good FBI agent may make her realize Charles isn't to be trusted after all. In a trailer for Season 4, Betty watches Charles outside of Pop's diner while a voiceover of hers says, "We don't actually know anything about Charles. Why is he still in Riverdale?"

The synopsis for the Nov. 13 episode also says that "Betty confronts Charles about his past." It's not clear if she discovered him spying on her and that's what leads to their confrontation, but she doesn't seem to fully be falling for his nice guy persona if she's still tailing him and questioning his motives.

There may be a non-sinister reason for Charles' spying, though. Riverdale creator Roberto Aguirre-Sacasa told TV Insider in August that "at first," Charles will help Betty through her discovery that she has the serial killer gene, and push her toward the path of goodness. Perhaps Charles, knowing that Betty could possess that gene because of her dad, is preemptively listening to her conversations to make sure she's not a threat. That could be why he's still sticking around Riverdale. However, it's ominous that Aguirre-Sacasa said Charles will "at first" help her. What happens later? Does he turn on her?

In any case, fans shouldn't worry that Betty will let Charles in that easily. She told Jughead that Charles "might" be the real deal, which means she's still not totally sold. And since it looks like she'll be spying on him right back within a few episodes, she may be one step ahead of whatever he's up to.

More like this
Helena Bonham Carter Doesn't Think 'The Crown' “Should Carry On"
By Sam Ramsden
Everything To Know About 'And Just Like That...' Season 2
By Jack Irvin and Grace Wehniainen
These Brooke Davis Quotes From 'One Tree Hill' Will Never Get Old
By Sabienna Bowman and Jack Irvin
'The Last Of Us' Episode Schedule Competes With The Super Bowl & Oscars
By Brad Witter
Get Even More From Bustle — Sign Up For The Newsletter
From hair trends to relationship advice, our daily newsletter has everything you need to sound like a person who’s on TikTok, even if you aren’t.