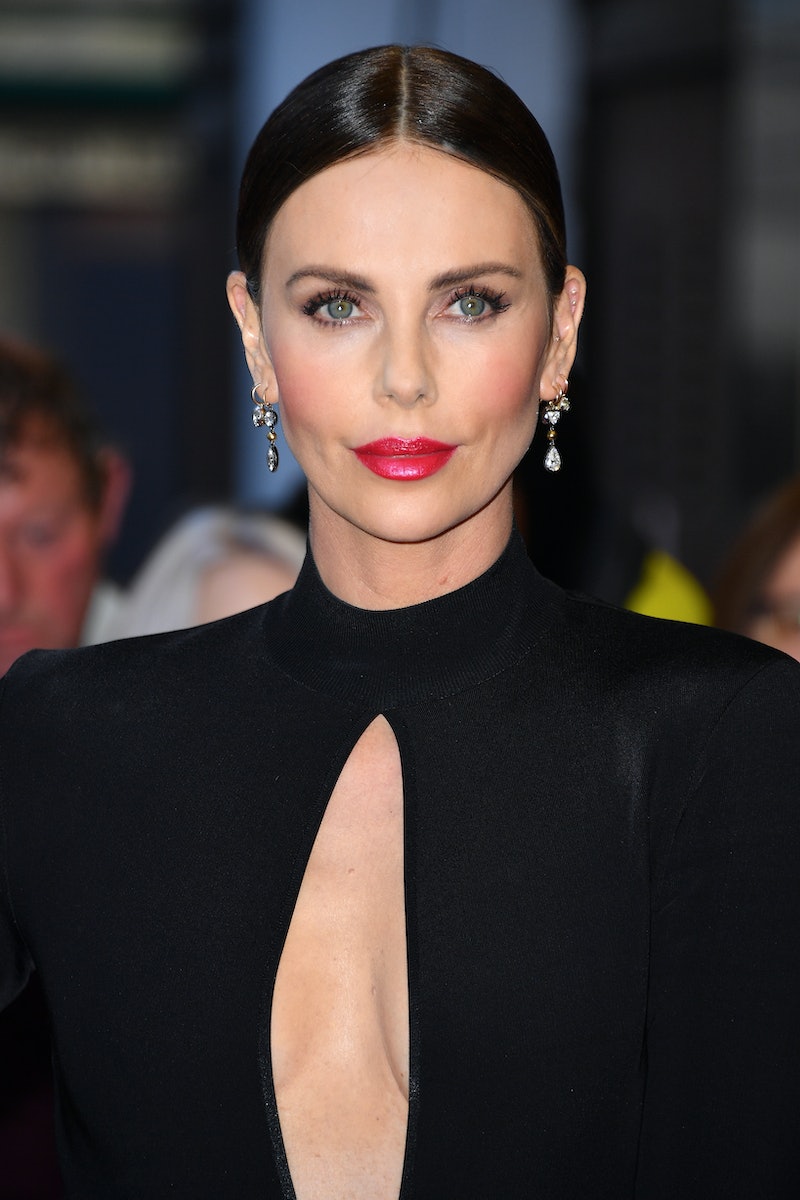 One of your favorite actors just swapped out her on-trend and chocolate brown lob in favor of a pixie with a twist. Charlize Theron got a bowl cut and lightened her locks to an ashy blonde shade. The look is stunning but it's totally not what you were expecting. The cut will also give you all of the late '80s and early '90s vibes. That's because it was inspired by that time that supermodel Linda Evangelista chopped off her long hair into a super short 'do.

Theron posted a shot of her new cut and color on her personal Instagram on Sept. 2. For most of the summer, the actor has been seen rocking a wavy, chestnut brown lob in images shared on her feed. She has traded that shape and shade for a sharp, dramatic, above-the-ears style that she is totally slaying.

PopSugar got the scoop about this look directly from Theron's stylist Adir Abergel. Her punk rock bowl cut pixie features heavy, blunt cut bangs and a top layer that goes around the entire perimeter of her head in one mostly consistent length. The style mixes golden and honey shades on top — with darker locks underneath. She has a close-cropped undercut, along with old school points next at her temples. The actor simply captioned the shot of her new 'do with "She's baaaaack #Fast9."

The hashtag is a reference to the next film in the Fast & Furious franchise. It certainly suggests that Theron got this particular cut specifically for her reprised role as Cipher in the upcoming installment, aka Fast & Furious 9. Bustle reached out to both Theron's and Abergel's reps for further information.

UPDATE: Abergel's team replied to Bustle, confirming that Theron's cut was a community effort. Abergel enlisted fellow stylist Jonny Eagland for assistance with the precision undercut. "I love collaborating with my hair brothers and sisters," Abergel said in an email sent to Bustle. Abergel finished the cut with a slight V shape in the back. The team labeled Theron's new shade a "wheaty blonde," which is dark in the undercut and grounded by dark roots while. It is accented with wheat and beige highlights woven into the bowl part of the cut.

PopSugar reports that the bowl cut was a joint venture between Abergel, who cut Theron's hair into a dark brown bob for the 2019 Oscars, and colorist Shannon Gallacher. The colorist lightened Theron's hair to an ashy blonde shade in a single day. Abergel then cut the actor's hair into the style you see in the Insta photo. He told Popsugar that the ends are "slightly textured," which keeps the style from looking dated.

Abergel also revealed to that the aforementioned Evangelista served as his source material for this cut. When the model lobbed off her locks back in 1988, it made headlines since it was such a drastic cut that was captured in real time in a series of photographs taken by Peter Lindbergh. While Theron was rocking a wavy lob for the longest time, this is still a major change, as well as a modern update of an iconic look.

Theron is quite the hair chameleon. She surprised her fans by showing up the 2019 Oscars with a totally new coif. At the time, Abergel told People that this look wasn't pre-planned for a role. Rather, his client opted for the change specifically for the Academy Awards ceremony.

Theron is best known for her golden blonde strands, which she hasn't had for quite some time now. She clearly has an adventurous streak when it comes to her hair and she isn't afraid to experiment. Her latest cut is as bold as it is beautiful.