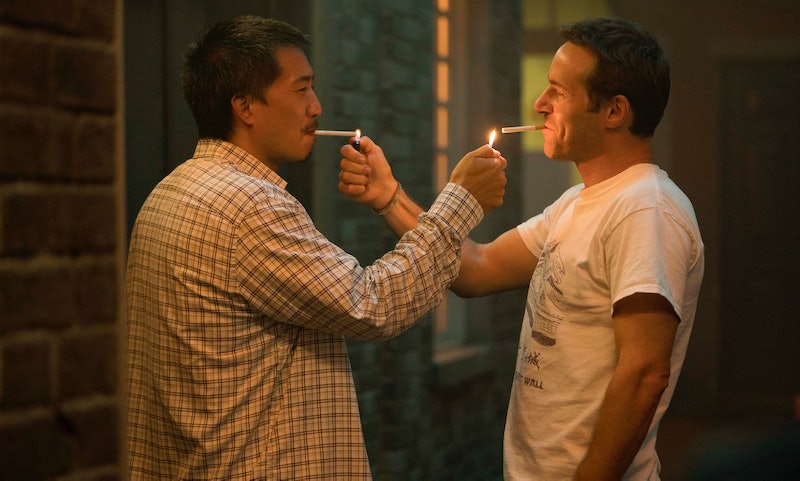 The Channel 4 drama Chimerica tells the story of American photojournalist Lee Berger, whose professionalism is called into question during the 2016 U.S. Presidential election. Berger originally rose to fame 30 years prior, having captured one of the most iconic photographs of all time: Tank Man, the image of a man standing in front of tanks on a Beijing road the day after the Tiananmen Square massacre. The four-part series boasts an impressive cast, and is based on Lucy Kirkwood’s Olivier Award-winning play of the same name. But is Chimerica a true story?

This series does, of course, have an element of truth to it, as the famous Tank Man photograph is very much real. In fact, it was named one of TIME's 100 most influential images of all time. However, the photograph was taken by a man named Jeff Widener, not Lee Berger, as TIME explains:

"On the morning of June 5, 1989, photographer Jeff Widener was perched on a sixth-floor balcony of the Beijing Hotel. It was a day after the Tiananmen Square massacre ... and the Associated Press sent Widener to document the aftermath ... Widener lined up his lens just as a man carrying shopping bags stepped in front of the war machines, waving his arms and refusing to move ... Widener assumed the man would be killed, but the tanks held their fire. Eventually the man was whisked away, but not before Widener immortalised his singular act of resistance."

As the Financial Times reports, Chimerica's Lee Berger is "a fictional U.S. photojournalist" created by writer Lucy Kirkwood. The article then goes on:

"The series ... follows the journalist ... whose picture of the anonymous Chinese protester made his name. In 2016, however, Berger’s desperation to get Syria on to the front pages drives him to doctor a photograph ... Deep in disgrace, Berger spies an opportunity for redemption when he learns that Tank Man might still be alive and contacts his old friend Zhang Lin ... in Beijing to begin his search."

There is currently no confirmation as to whether any other plot points in Chimerica besides the Tank Man photograph are rooted in real events. I have reached out for comment on the matter, and will update with any new information once it becomes available.

However, while the 2019 TV thriller may not be following a real-life story point by point, the series is most certainly based on some very real political phenomenons of late. According to Variety, the new series will delve deep into the issue of fake news.

Kirkwood, who also worked as the executive producer of the television show, discussed with Channel 4 how the original story has been altered for TV in order to portray our "increasingly outrageous world." Kirkwood said:

"Since I wrote the original play in 2013, the questions it raises have only acquired greater scale and relevance for us all. It was thrilling for me to return to the story of two men, one American and one Chinese, trying to work out how to respond to the outrages of an increasingly outrageous world, and look through their eyes at our changing relationship with journalism, power, protest, and images themselves."

According to Digital Spy, one of the show's executive producers, Colin Callender, has revealed his belief that U.S. networks may be reluctant to broadcast Chimerica due to the inclusion of controversial topics, such as fake news. He said: "I think right now, in spite of all the talk about what [streaming services] are doing and all the talk of the 'brave new world' of television in America... it ain't that brave."

According to the Express, the four-part series cast will include Alessandro Nivola, Cherry Jones, Sophie Okonedo, F Murray Abraham, Terry Chen, and more. This updated version of an already fascinating theatre production is sure to provide some amazing TV viewing. And I, for one, cannot wait.

Chimerica begins on Wednesdays at 9 p.m. on Channel 4.