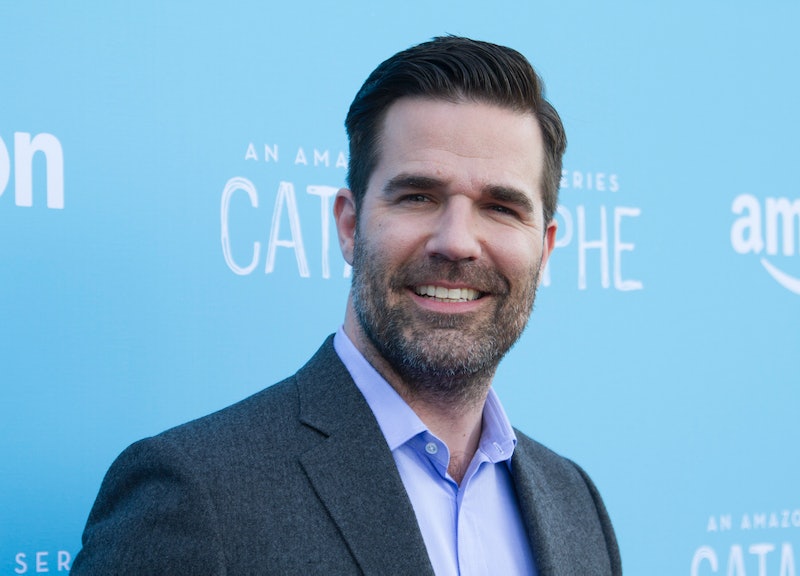 The fourth season of Catastrophe is currently underway, and the Channel 4 sitcom is just as hilarious as ever. The series, which stars Sharon Horgan and Rob Delaney, follows the lives of Sharon and Bob Morris — an unlikely married couple who unexpectedly fell pregnant after a week-long fling. Since its debut, the series has gone on to enjoy a further three outings. But will Catastrophe return for season five? Here's what we know so far.

As it stands, there hasn't been anything announced in terms of a new series, and from what has been said, it's not looking good. Bustle have reached out to the show's representatives for comment, and will update with any new information once it becomes available. However, it seems like fans could be waiting a while for any news, because as reported by Digital Spy, the writers and stars of the series haven't even begun thinking about a fifth season of the hit comedy. According to Channel 4 sources, the reason for the longer-than-usual wait for a fifth series could be down to the lead stars' increasingly busy schedules. As reported by the Radio Times, the source said "We are not expecting to commission a fifth series. At least not for a long time." Adding fuel to that fire is a recent tweet from the official Catastrophe Twitter account, which referred to season 4 as the "final season."

When speaking to the Radio Times, Delaney, who portrays Bob Morris in Catastrophe, said:

"We sort of think of our spiritual forbear as the Before Sunrise, Before Sunset films. They rather beautifully dip in once every ten years on this couple, and that's an amazing way to tell a story. That's not out of the question; (it) wouldn't be a crazy way to do it."

And when asked about the future of the series, and whether or not viewers can expect to eventually see Sharon and Rob in their golden years, Delaney joked, "That's not out of the question, it's a very funny idea," and co-star Horgan added, "We would have to be estranged from our kids to go down that route. That gives me the heebies. We're not teenagers and the only teenagers' problems are my own daughter's and I am not going to put her life on screen."

Delaney has also previously discussed the bitter-sweet ending of Catastrophe's third season, which heavily featured the late Carrie Fisher, and became one of her very last television projects. Speaking to Digital Spy at the Royal Television Awards, the 42-year-old said:

"Carrie's a massive part (of the last series). She's in most of the scenes in the final episode. She's a huge driving force in it. And in addition to being funny, it's really quite beautiful, which is weird because then she died. Now in retrospect watching it as we've been editing, it's gut-wrenching because of how poignant everything she does in it is."

In her final appearance on the Channel 4 sitcom, the show covered subjects including death, grief and alcoholism — and concluded with a fitting in memoriam "For Carrie" tribute. Catastrophe has aired every Tuesday at 10 p.m. on Channel 4, and if you're looking to catch up with this brilliant series, you can do so on All 4.