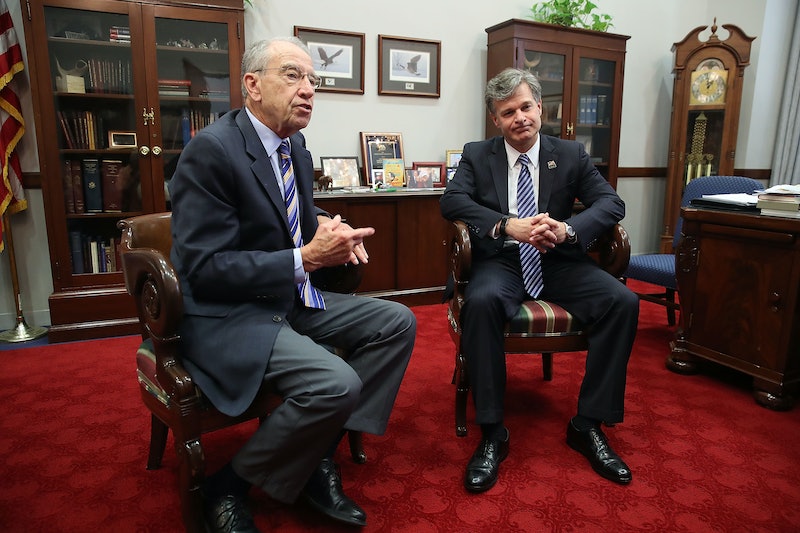 The firing of James Comey now seems like a bookend on the whole Russia-Trump drama, but don't forget that just about two months ago, Trump fired the main man in charge of the Russia investigation. At first, he suggested it was based on DOJ recommendations, but later admitted he was going to fire Comey regardless. Now, Russia has continued to draw headlines, and the new leader of the FBI will have a role in how the investigation plays out. So there's one question to ask before confirmation hearings Thursday: is Christopher Wray a Republican?

Wray is a registered Republican, NJ Advance Media reports, and has donated thousands of dollars to Republican campaigns over the years. This includes both John McCain and Mitt Romney's presidential campaigns, as well as other smaller races — you're talking some $50,000, CNN reported after referencing Federal Election Commission records.

That said, there's no evidence that Trump's pick is someone overly partisan who will do the president's bidding; in fact, it's likely quite the opposite. Leon Neyfakh at Slate argued that Wray is basically another Comey, and that would make sense since they worked together at the Department of Justice. Before becoming director of the FBI, Comey was the deputy attorney general under John Ashcroft. Wray was also at the DOJ at the time, serving as assistant attorney general, and would have reported to Comey.

An old friend of Wray's and a former federal appeals court judge, Michael Luttig, told NPR that Wray is a good choice to serve the Bureau at this time.

Chris is exactly the person both the country and the FBI need at this time in our history. Chris is fiercely independent; he is a man of unquestioned integrity, and he has impeccable judgment.

The FBI Agents Association has also endorsed Wray's nomination. They say he understands "the nature of investigative work."

But the degree to which that investigative work looks into Trump, his campaign, and any possible Russia connections is the real concern of many. That will have to be addressed in the confirmation hearing, as the questionnaire put forward by Wray in advance is short of any controversy — or mention of Trump.

Ultimately, however, it will be up to senators to ask the tough questions about how the administration will be treated. Questions about Wray's Republican party registration and donations could play into that, too, because the important thing is that the FBI remains politically independent.