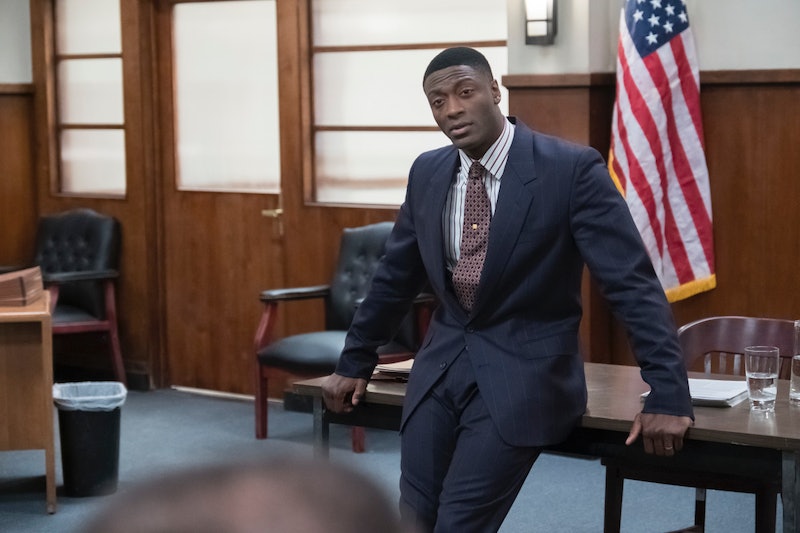 Showtime's City On A Hill is pretty much set up for success from the get-go. Not only does Kevin Bacon star, but the series is produced by Ben Affleck and Matt Damon, who have no shortage of accomplishments under their belts. But is City On A Hill based on a true story? Or is it a narrative all its own?

From the sounds of it, City On A Hill's characters are fictional, but they're set against the backdrop of 1990s Boston that rings pretty true to how things were. "This is really a story about the change that took place in the '90s: political change, law enforcement changes, societal change, economic change, one very cynical FBI agent, and one idealistic black Assistant District Attorney who sees this moment," Chuck MacLean, creator and executive producer, told Boston magazine. MacLean lived in Boston during this time period, according to Deadline, so he has firsthand experience in what the tone of the city was like in those years, and Damon and Affleck are famous Bostonians as well.

Though it's rooted in reality, big names from around that time period of Boston's history are being omitted from the narrative in favor of the show's completely original story. The likes of Whitey Bulger will get a nod, but definitely not a storyline, according to Variety. “I didn’t want to approach it at all,” MacLean said at an ATX Television Festival panel earlier this month, the outlet reports. “I figured if we got [the reference] out of the way [in the premiere], people wouldn’t think we were building to his [entry] into the series. … I grew up with that story — it was on the news every night — I’m tired of it.”

It’s honestly probably for the best that the show isn’t clinging too closely to real-life inspiration — that kind of leniency gives the story plenty of freedom in terms of where they might go next. There's no word on if this is meant to be a standalone series or if they're gunning for a Season 2, but that kind of creative freedom with the time period would certainly make it easy to do so.

According to Deadline, President & CEO of Showtime Networks David Nevins says the story is meant to shine a spotlight on some of the issues Boston's police force faced during that time, of which there were many. “City On A Hill has the veneer of a classic Boston cops-and-robbers drama, but actually dives head first into challenging the very institutions it depicts,” he said. “In reality, the series is a penetrating look at the larger criminal justice system and those who operate within it, with mesmerizing performances by Kevin Bacon and Aldis Hodge anchoring the suspense.”

The show was inspired by other similarly gritty projects like The Town, and is definitely going to have notes of your typical cop stories, even as it tries to set itself apart. “I’m sure there are overlaps with all kinds of crime stories,” producer Tom Fontana told IndieWire. "The dance between [the two leads] goes on for the entire season. Hopefully, at any given moment, you’re not sure who’s winning and who’s using who and for what reasons. We’re trying to have these two characters try to figure each other out and maintain a sense of themselves. It’s a mixed evolution on both their parts."

It's too soon to tell exactly what this show will be, or how audiences will receive it. But it's got some knowledgeable Boston natives at the helm, so hopefully its story will ring true.

More like this
'Inside Man' Was Inspired By 'Sherlock' In The Most Unexpected Way
By Catharina Cheung and Maxine Harrison
'The White Lotus' Season 2 Trailer Teases Multiple Affairs & Another Dead Body
By Bustle Editors
Shonda Rhimes' Net Worth Makes Her One Of The Wealthiest People In TV History
By Hugh McIntyre
How Much Are The 'Schitt’s Creek' Stars Worth?
By Hugh McIntyre
Get Even More From Bustle — Sign Up For The Newsletter