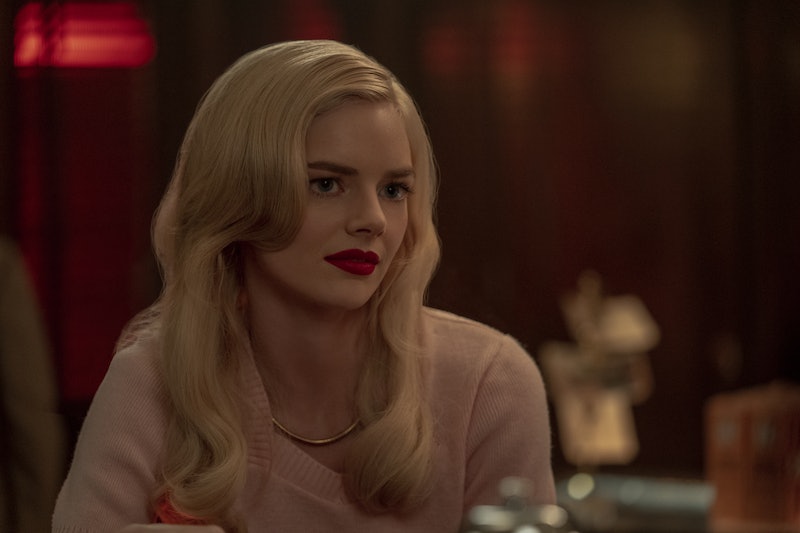 Ryan Murphy's Hollywood is an idealistic mix of fact and fiction. Though characters like Rock Hudson, Hattie McDaniel, and Anna May Wong were actual movie stars of the era, most of them aren't based on a real people, including Samara Weaving's Claire. Onscreen, the young, blonde actor is the daughter of a major studio head (Rob Reiner) and his wife turned successor Avis (Patti LuPone). In other words: the picture of a wealthy, white, blonde bombshell who could easily sail to stardom based on looks and nepotism alone.

The other characters, meanwhile, initially struggle to make their way in post-World War II Tinseltown due to race, gender, and sexuality biases. Until Hollywood flips the script, reimagining a version of history in which systemic power dynamics and discrimination were challenged long ago. Camille (Laura Harrier) is a black woman who lands a starring role in a major studio picture that's written by Archie (Jeremy Pope), a black man; directed by Raymond (Darren Criss), who is half-Asian; and greenlit by Avis, a female studio chief.

"With the present so fraught and the future uncertain, we turned to the past for direction, uncovering buried history to spin an aspirational tale of what ifs," executive producer, writer, and director Janet Mock explained to The Hollywood Reporter. "What if a band of outsiders were given a chance to tell their own story ... and what if they were all invited into the room where the decisions are made, entering fully and unapologetically themselves to leave victorious and vaunted, their place in history cemented?"

Claire, then, initially seems like the enemy. But she doesn't inhabit that role for long. By the end of the show, she becomes an ally, helping to give voice to marginalized actors who were otherwise forced to hide their true identities, relegated to stereotypical parts, or shut out from the industry altogether. If she were a real person, she would have been someone who really could have helped reshape Hollywood's story.

"I've always been interested in this kind of buried history, and I wanted to create a universe where these icons got the endings that they deserved," Murphy told THR in a separate interview. "It's this beautiful fantasy, and in these times, it could be a sort of balm in some way."

That's because, in Murphy's Hollywood, almost everybody gets a happy ending.

More like this
Mike Flanagan Teases 'The Midnight Club' In This Exclusive, Creepy Clip
By Grace Wehniainen
Caleb McLaughlin Details Racism From 'Stranger Things' Fans
By Radhika Menon
What’s New On Netflix: Ana De Armas’ 'Blonde' & A Nick Kroll Special
By Arya Roshanian
'Elite' Season 6 Is Arriving Sooner Than You Think
By Gretchen Smail and Grace Wehniainen
Get Even More From Bustle — Sign Up For The Newsletter

This article was originally published on April 24, 2020