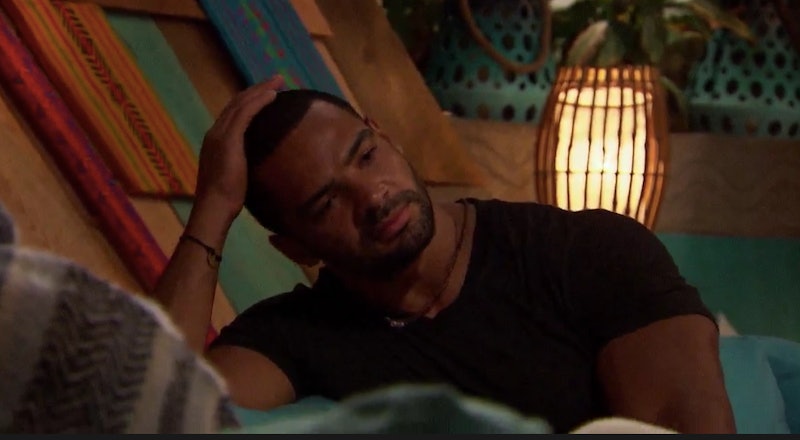 Up until last week, it seemed like there was no way Clay was leaving Bachelor In Paradise single. He and Nicole seemed happier than ever, and had even made things official. But when Clay's ex-girlfriend Angela showed up to Chris and Krystals' wedding, it changed everything. And now that she's officially joined the cast, it's unclear if Clay and Nicole will withstand the added tension.

In the teaser for the second episode of Week 5, Clay looks seriously conflicted. "I'm confused, and I don't know what the right thing to do is," he says. Meanwhile Nicole tells the cameras, "Whatever plan she has, it could be working," assumedly referring to Angela.

This must mean something happens to shift the tides of Paradise, because when Angela arrived, Clay told Nicole not to worry and that they were solid. And when Nicole confronted Angela in Monday night's episode, she said she wasn't "a drama person" and had no intention of getting between Nicole and Clay. But based on the teaser, it seems clear things have changed on both sides.

Since arriving in Paradise, multiple people — including Angela's good friend Annaliese — have questioned whether or not Clay was ready to explore a new relationship so soon after breaking up with Angela. They broke up three months before Clay arrived in Mexico, so the feelings are still fresh, and Clay has told Angela that he still cares about her.

And while Annaliese may be gone, she's not the only one keep her eye on Clay. In Monday night's episode, Tayshia pulled him aside to ask why he didn't introduce Nicole as his girlfriend at Chris and Krystal's wedding, even though they considered themselves a couple. To Tayshia, it seemed like a red flag, but Clay insisted it only slipped his mind. Uh, we'll see about that buddy.

As for how things pan out, the cast is, of course, contractually obligated not to spoil the end of the season. But that doesn't keep them from dropping hints (intentional or not) on social media. During Monday night's episode, Clay shared some semi-telling tweets:

"I can [sic] homestly say I would never have went to paradise if I had known my ex [sic] was be showing up," he wrote. If he was still with Nicole post-Paradise, this doesn't seem like a tweet he'd share, because even with Angela there it would have been worth it, right? And if he switched gears and got back together with Angela, he definitely wouldn't send this tweet...unless, that is, he's just really trying to throw us off the scent.

Nicole also tweeted during the same episode while having a sleepover with Tayshia. "We both wanna say that dating is hard (shocker)," she wrote. "We are all the product of dating in the 21st century. It's a nightmare."

If Nicole is currently in a relationship with Clay (or anyone, for that matter), she probably wouldn't be airing her frustrations about dating. As cute as they were, the more they tweet, the more likely it seems that Clay, Nicole, and probably even Angela leave BiP single.