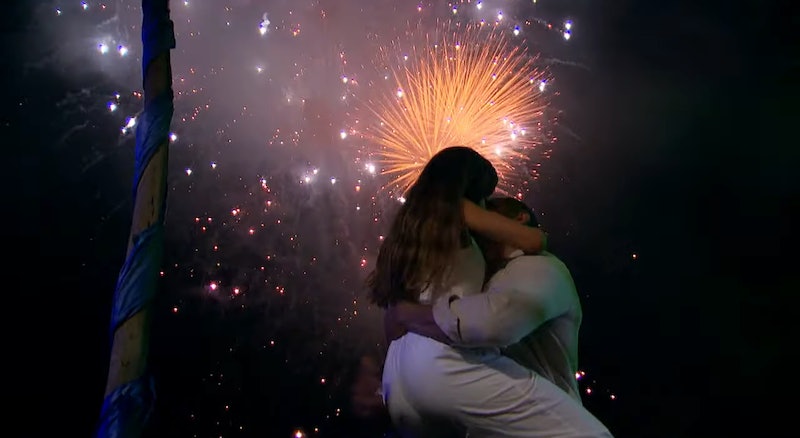 After some setbacks in the forms of Jordan and Christian, Clay and Nicole are together on Bachelor in Paradise. And whether you thought her song for him was cute or cringe-worthy, Nicole and Clay could be dating after Paradise. After all, Clay sure seemed to enjoy it and they are currently one of the strongest couples on the beach. But even though they are both active on social media, it's not evident through Twitter or Instagram if Clay and Nicole are still together after the show — and that just may be the biggest sign that Clay and Nicole will break up on Bachelor in Paradise.

While Nicole and Clay are enjoying Paradise in peace now, their road to romance was rocky. After hitting it off with Clay, Nicole went on dates with both Jordan and Christian. Yet, her decision to give her rose to Clay was pretty much made up for her since Jordan and Christian were kicked off for getting into a fight. But Nicole defended her feelings for Clay during the Bachelor Happy Hour podcast with Bachelorettes Ali Fedotowsky-Manno and Rachel Lindsay. Even when she was going on dates with other men, Nicole said, "Deep deep down, I feel like we both had that mutual understanding that it was always going to be Clay."

The complimentary way that Nicole talked about Clay on the Bachelor Happy Hour podcast could be a clue they are still together. She discussed how she trusted him and their chemistry was immediate after their one-on-one date. "I felt like I was talking to a best friend the entire time and that's when I know it's real. That's when I start getting that feeling, you know? Because it wasn't just like, 'Ooo, I find him attractive,'" Nicole said.

She also praised the way he handled the Jordan and Christian fight — and echoed what she said on Bachelor in Paradise about how his response made it clear that she wanted to be with him. "The fight made me appreciate Clay so much," Nicole told Ali and Rachel. "It made me realize, 'Wow, I was so wrong.' Clay actually has these characteristics that I'm looking for. He's tame. He's mature, a gentleman, he processes his feelings — he's not just going to react because someone punched a piñata." Ali replied, "Boys fight. Men do what Clay did." And Nicole responded, "Couldn't have said it better."

Based on their behavior on the beach and her recent comments, Clay and Nicole seem unstoppable right now. But there is bound to be another hiccup when Clay's ex Angela comes to Paradise. Besides looking like she'll go on a date with Mike in Paradise, preview images from ABC show that Angela is a bridesmaid in Chris and Krystal's wedding. Yet, Clay's comments to Annaliese earlier in the season highlighted how he's not looking to get back together with Angela. So the only real reason fans should worry about Clay and Nicole is due to their social media.

As a digital journalist, Nicole's social media game is strong with hilarious tweets and Photoshopped images on Instagram. And while she has been giving commentary throughout this season of Bachelor in Paradise, she doesn't have any direct dialogue with Clay on social media. She does refer to him, like when he called her hotter than J. Lo and she tweeted, "Ladies, if your man doesn’t call you 'a hotter version of Jennifer Lopez' then HE AIN'T IT." But the only tweet of hers that Clay is tagged in was in reply to something she wrote about Miley Cyrus and Liam Hemsworth breaking up. A fan wrote, "If only Miley would have serenaded him beach side with an original work of art like you did for @clayharbs82" to which Nicole simply replied, "Hehe" with a winky emoji.

For his part, Clay has been posting more on Twitter and Instagram since Paradise started. There seems to be an uptick of shirtless pics of himself (possibly a clue he's single and ready to mingle?) and he recently got into a somewhat surprising Twitter spat with Nick Viall. But he hasn't mentioned Nicole in any of his posts. This could be to protect their post-Paradise relationship ... or, for the cynics, it may be an indication that they don't really communicate anymore because they broke up.

When asked on Bachelor Happy Hour if she ends up with Clay, Nicole said, "I can't give away too much. But I will say it's gonna get juicy. It's gonna get fun and I'm excited for everyone to see." She added, "You're gonna see me go through a lot of emotions." Viewers will just have to be patient to discover whether those emotions are good news or bad news for her relationship with Clay.