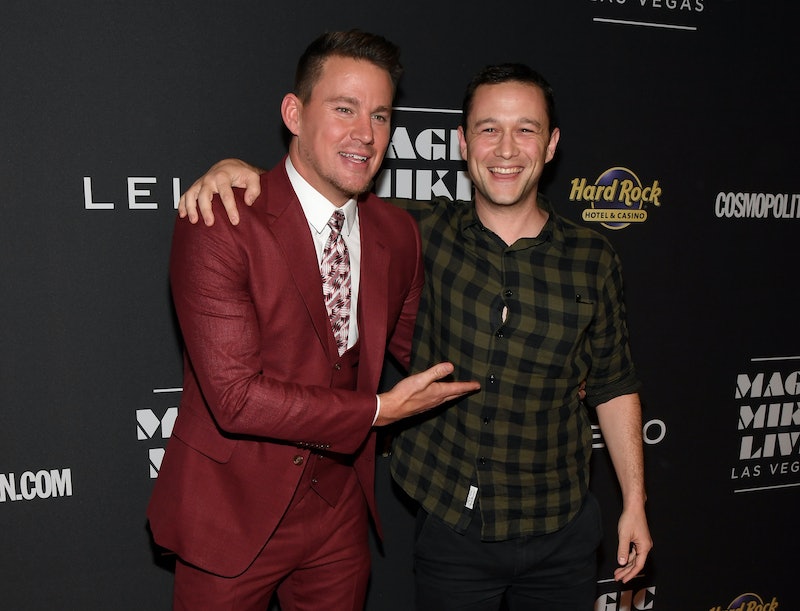 It's hard to tell at first glance what Amazon's new series Comrade Detective is about. Purportedly a lost classic of Romanian television re-aired for American audiences — complete with out-of-sync dubbing — in reality, Comrade Detective is not a true story. Nothing about this series is "true," from its status as a piece of '80s communist propaganda to each episode's intro sequence in which executive producer Channing Tatum introduces it as a cult favorite of such famous fans as Stanley Kubrick. But that doesn't mean Comrade Detective doesn't have any real world inspirations. In fact, the sources from which this idea sprang are remarkably varied.

"We were just thinking about all the movies that we grew up with in the '80s," co-creator Alessandro Tanaka tells Bustle in a conference call, about how the idea first came to him and his writing partner, Brian Gatewood. "Movies like Red Dawn and Rocky IV and Rambo, they were all pieces of Hollywood propaganda, demonizing the communists and the Soviet Union. Then we just started kicking around the idea of, 'What was [Rocky IV's] Ivan [Drago] watching from behind the Iron Curtain?' That was the jumping-off point for how this started, and it sort of developed from there."

Their goal with Comrade Detective was to create "the inverse of the entertainment-slash-propaganda that we grew up with," Gatewood agrees. So, in addition to their American inspiration, he and Tanaka did plenty of research into the kind of television that was being produced in the Soviet Union back in that same era.

"There was a great show called Tatort from Germany, La Piovra in Italy, and also in East Germany there was actually a show that was a response to West Germany's Tatort, which their government didn't want seen on their airwaves, so they created their own cop show called Police Call 110," Gatewood says. "Specifically, there was a show called The 30 Cases Of Major Zeman, which was a Czechoslovakian show where the communist detective was the hero, which was made by the State in order to prop up the Communist party."

But Gatewood and Tanaka also had more modern influences as well when crafting Comrade Detective. The more comedic aspects of their series were inspired by "buddy cop movies like Lethal Weapon and 48 Hrs.," Tanaka says. On the more dramatic side, Gatewood reveals that, "we talked a lot about Inglourious Basterds when we were first starting out to write. Sort of in the way that that works in chapters and sequences, you know, we were making a six-episode series, and we were trying to think of each episode like a chapter. In terms of other non-period-appropriate references, obviously a movie like Se7en, which is such a great film, is going to influence how you see the cop drama."

Audiences might be surprised to find out which modern piece of entertainment didn't influence Comrade Detective: FX's Cold War spy drama The Americans, which might seem like perfect fodder for a satire set in that same era. "To be honest, The Americans didn't really come up," Gatewood says. We're aware of it, it's a great show; but honestly, it's its own series, and we set out to do our own show."

In addition to '80s American cinema, period Soviet entertainment, and modern filmmaking touchstones, Gatewood and Tanaka also found their process somewhat impacted by current events, given the fortuitous timing of their series. "We were writing the film during the election, so I'm sure that that certainly influenced our writing," Gatewood confesses. "I believe our second day of shooting was the U.S. election. That was a very interesting day, considering we were making this show with an entirely Romanian cast and crew. They were very upset about the election, because they had always seen the United States as a buffer between them and Russia, so they were very upset about encroaching Russian influence in Romania."

Of course, a show that boasts the vocal talents of Channing Tatum, Joseph Gordon-Levitt, Nick Offerman, Jenny Slate, and Chloë Sevigny isn't meant to be taken entirely seriously; but Gatewood and Tanaka hope their viewers do find some resonance within the hijinks. "Our goal with the show was really to make something entertaining, and hopefully dramatic and suspenseful and funny," Gatewood says. "That's the first thing we'd like to do. But [Comrade Detective] is a satire of propaganda, of extreme ideology, and of perception. We're living in a world where most of our information is sorted through a propagandized lens. So hopefully people will watch the show and be entertained, but also think about the way in which they receive information in this day and age."

An ambitious goal for any television series, to be sure; but one that Comrade Detective might just be able to pull off, given the rich context of its many real-world influences.