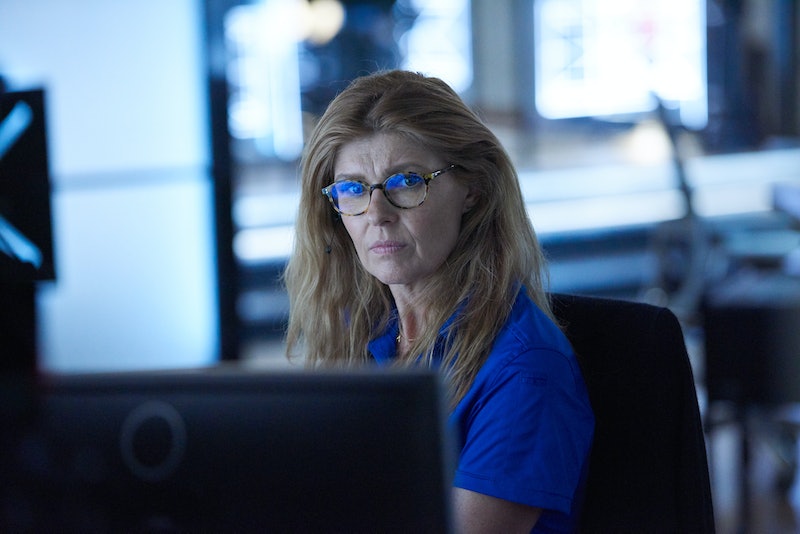 First, some context: 9-1-1 is a new Fox procedural from Murphy and his longtime co-collaborator Brad Falchuk. It centers around a team of Los Angeles-based EMTs fighting to balance personal and professional crises. At work, they're faced with a ceaseless stream of life-or-death emergencies. At home, they're forced to contend with their own set of everyday dramas. The result is a show that dips between action and emotion, shifting from the high-intensity chaos of life as a first responder to the intimate but still difficult struggles of simply being human. Fellow AHS alum Angela Bassett stars as field sergeant Athena Grant, while Murphyverse newcomer Peter Krause (Parenthood, The Catch) portrays fire captain Bobby Nash. Britton plays Abby Clark, a 9-1-1 operator who helps lead distressed callers to safety while on the clock, then cares for her ailing mother after hours.

The show itself spotlights a too often overlooked group of everyday heroes, but Clark's job is perhaps one of the most under-appreciated. While the efforts of her colleagues are visible from the field, hers are limited to the isolated confines of the call room, but her impact is no less critical. As detailed by Situational Awareness Matters, a blog founded by retired Fire Chief and EMS provider Rich Gasaway, 9-1-1 dispatchers are the first line of communication in an emergency. Not only are they charged with the difficult task of keeping panicked callers calm, but with extracting information vital to helping first responders gain an early understanding of what they'll be dealing with once at the scene. As Albany Fire Department Chief Ron Rowe told WFXL last year:

"Fire, EMS, police, sheriff, all that is public safety. They're limbs on the public safety body. 911 [dispatch] is the heart of that body. If it's messed up, the rest of the body doesn't work good."

As far as whether or not Abby Clark is herself a real person, neither Murphy or Britton have addressed the subject, but characters based on real people are generally advertised as such, so it doesn't seem likely. Nonetheless, she represents a very real, important job, and the situations she must navigate are all based on "viral videos or international cases that [the show's writers] read about and were obsessed over," Murphy told The New York Post last month. That includes even those that sound the most far-fetched: In the first episode, Nash's fire team must rescue a newborn who’s been flushed down the toilet. Yes, you read that right. And yes, that actually happened.

Of course, combing the internet for wild stories is a surefire way to make the flashy, see-it-to-believe-it television Murphy has built a reputation on, but the 9-1-1 team also wanted to keep things emotionally authentic in order to pay homage to the real people that have confronted these ordeals. As executive producer Alexis Martin Woodall told Variety:

“It is something that we all could potentially be going through making that 911 call. [So we thought], how do you make it both fun and exciting, but also authentic and honor both the victims and the first responders? I want to make sure that we can be emotionally accurate."

Whether or not they — and Britton, in particular — succeeded in that goal remains to be seen, but you can judge for yourself when 9-1-1 premieres Wednesday, Jan. 3 at 9 p.m. ET.