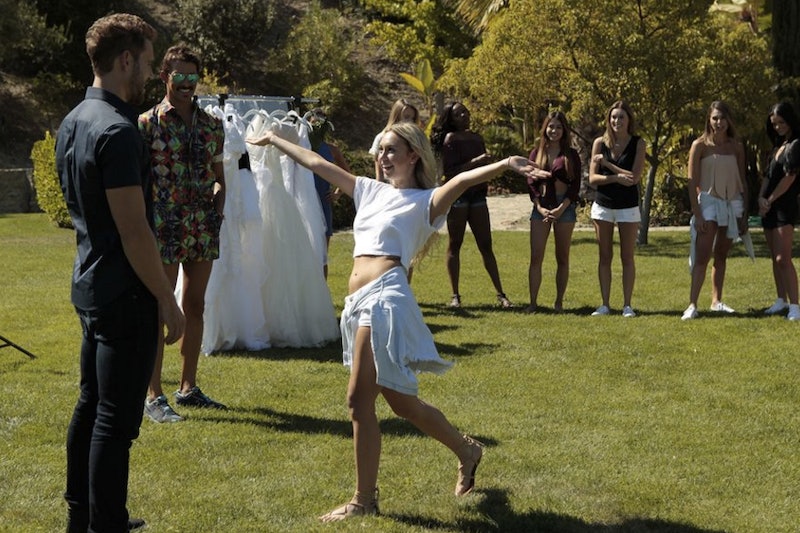 The "villains" don't usually go far on The Bachelor, but Corinne Olympios is still sticking around on Nick Viall's season. But it is possible that a villain makes it to the end this time? Corinne was recently spotted wearing what looked like an engagement ring. Does this mean that Corinne is engaged and ended up winning Nick's heart? (ABC tells Bustle they are not commenting.)

Since Corinne is the most-talked about person this season, you know the photo of Corinne wearing a ring was circulated a million times on social media and in group chats everywhere. But, based on what we've seen so far, it is pretty doubtful that she and Nick are engaged. Sure, there's an undeniable chemistry between the two of them, but Nick seems to have way deeper connections with other contestants. So, if Corinne really is engaged (doubtful since the show didn't film all that long ago), it's probably not to Nick.

And the other reason she's almost certainly not engaged to Nick is that everyone who watches The Bachelor knows that the couples are sworn to secrecy. They don't even follow each other on social media, let alone wear their Neil Lane diamond engagement rings in public and prominently pose with them until the season is over. Remember how JoJo Fletcher and Jordan Rodgers revealed they had to keep things sneaky last Bachelorette season?

Say what you want about Corinne, but you cannot deny that this women's mind is always racing. As we've seen on the show, she is always one step ahead thinking of ways to stand out, so why not sport a new ring on social media? I wouldn't be surprised if she wore the ring knowing it might get people talking. And I don't blame her. Instead of bullying Corinne, the fandom needs to be thanking Corinne for making the show exciting.

The ring she's wearing might not be a diamond ring or even an engagement ring, but considering that she is in the spotlight for being a contestant on show with the goal of season finale proposal, fans are obviously looking into that very conspicuous ring placement. The pic in question was posted on the Girl With No Job Instagram account, which I faithfully follow so I know that the person who runs the account, Claudia Oshry, is happily engaged. Since the Instagram star's engagement ring is not visible, maybe Corinne is wearing her ring. And if that's not Girl With No Job's ring, then it's still working out for both of them since they are getting a lot of attention for this photo.

Another reason why I think Corinne was perhaps borrowing the ring is because she was spotted in other recent photos without it. Not only do the dates line up, but so does the manicure and apparel selection from the photo with Claudia.

I live for Corinne and if this really is a fake engagement stunt — after all, it could just purely be an accessories choice — then props to her. I'm sure there will be a plethora of sponsored Instagram posts coming her way after he time on The Bachelor thanks to the public's interest in her. Plus, I'm sure Corinne will clear up this whole thing in no time... or at the very least by the time the season ends in March.