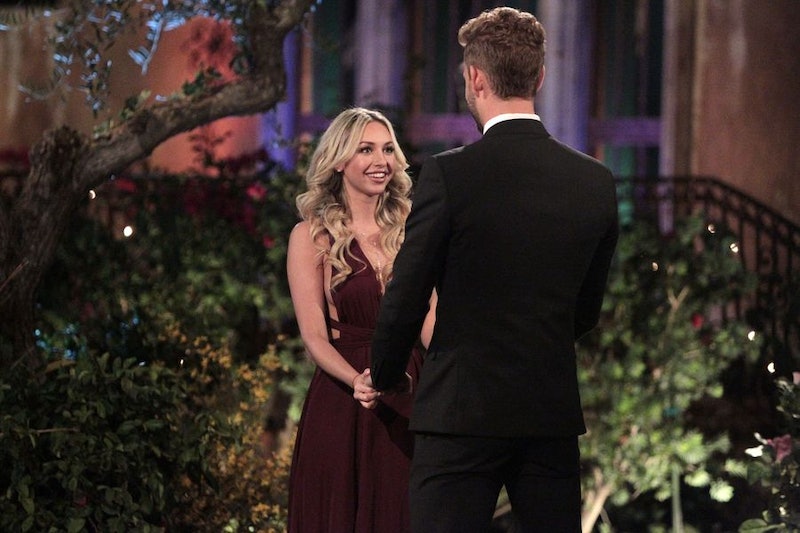 Part of being on a reality television show is knowing that you will have an edit, and you should also know that that edit isn’t up to you — it’s up to the producers of the show. There is always a villain on The Bachelor (aka the one who isn’t there to make friends), as sure as there are five archetypes of guys in a boyband. It’s just how it goes. Having met all of the women on Nick Viall’s season, will Corinne be the villain on The Bachelor?

Corinne seems just fine as a person — she has good and bad points. Her video introduction showed that she is running her family’s company, she’s looking for love, yadda yadda. But it also showed that she is 24 years old and has a nanny do everything for her, including cut up cucumbers for a snack. I mean girl, learn how to wield a chef’s knife and do it yourself. Anyway, once Corinne got out of the limo, she gave Nick a token for a hug, which was kinda cute. Once settled in a sea of red dresses (to Corinne’s credit, she wore burgundy), Corinne practiced giving other women the evil eye. Then, she said she wanted to “take” the first impression rose, and then went in for a big smooch in front of all of the other women. The rest of the contestants were not happy, obviously. This bodes for Corinne getting the villain edit for this season of The Bachelor. I think so, and the Internet seems to agree.

Here’s the thing — producers can’t make up footage, but they can cut together different things to tell a story. Those actions have to be on camera, though, so if Corinne gets this villain edit, she has to be doing something to help advance the story. Time will tell if Corinne is a Chad or an Olivia, but I feel like this woman will have a big season on The Bachelor.