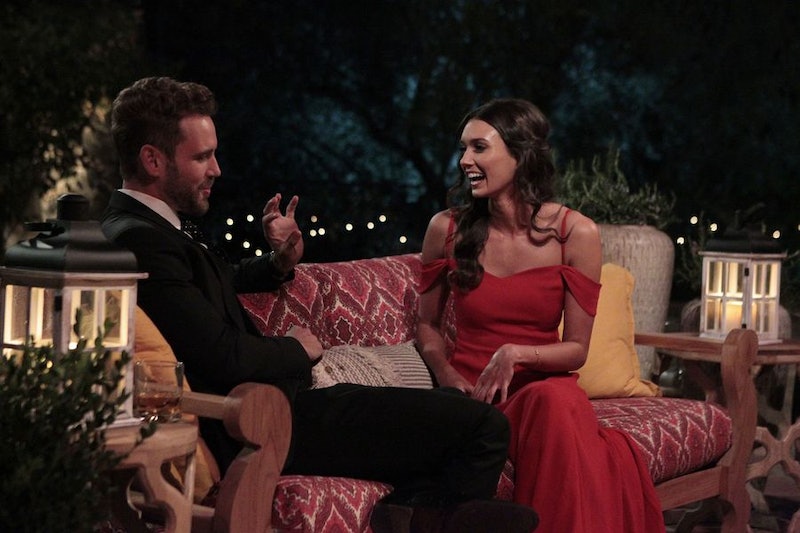 It’s no secret that The Bachelor’s attitude toward sex, as a series, has been fairly antiquated in seasons past. In an age where premarital sex is common, contestants on the show usually treat the issue with kid gloves. I mean, no one talks about it, let alone does it, before it's officially sanctioned by the producers. Any sex had between contestants and the Bachelor or Bachelorette before the Fantasy Suite date (which comes after they meet the family but not before the final decision is made) is treated as shocking — ie: everything that went down in Ireland on Kaitlyn Bristowe's Bachelorette season. That being said, I think the franchise is turning a new leaf with Nick Viall’s season of The Bachelor. From what I can see so far from the premiere, Nick’s season of The Bachelor is the most sex-positive of any season I can remember, and this is a very, very good thing.

The thing that always baffled me about The Bachelor and its ilk is that they like to ignore that sex is a big part of relationships, especially if marriage is the eventual intention. You’re going to chain your horse to that cart for life (in an ideal world), and you’re not going to test drive the merchandise first, well that just seems irresponsible to me. And even if you don’t want to get married and just find someone really, really attractive, why shouldn’t you choose to safely and responsibly act on that? Sex is not the enemy of relationships, or reality television shows, for that matter.

I’m not naïve enough to think that people on The Bachelor haven’t had sex before Fantasy Suite times, but Kaitlyn Bristowe’s season of The Bachelorette was the first time it was shown (well, it was heard through a closed door that the cameras relentlessly taped), and Kaitlyn’s edit was less than forgiving. She was treated like a harlot by viewers, when in reality, she had went with the flow and slept with a guy she really liked, a man who would be her eventual runner-up (Nick).

Kaitlyn wasn't the only contestant shamed for hooking up before the Fantasy Suite dates. Let’s take a look at Clare Crawley — she and Juan Pablo Galavis hooked up in the ocean on his season of The Bachelor in 2014, and then the next time she saw him, he shamed her. "I have a daughter. I don't want her to see what happened. If she sees it I don't think it would be that nice," he told Clare. Um, what? Weren't there two people in that water, dude?

The whole tone of Nick’s season is different than those two other situations. There was a conversation between the women on the first night about "test driving the car," with one contestant rightly noting, "I mean we're adults here, if you're going to marry someone I'm sure you're going to test drive the car. Sex is a very important part of a relationship." I can’t remember sex being brought up that quickly on a season of The Bachelor or The Bachelorette before in an honest, respectful way. Kaitlyn did tell Chris Soules he could plow her field during the premiere of his Bachelor season, but her joke made her get the awkward, "inappropriate contestant" edit for the first episode. Nick's women had an honest discussion about their feelings on pre-proposal sex and no weird music was played over it that undermined the content of the scene.

Continuing the sex-positive theme, the promos for this season all say that the girls “want some Nick,” and the implication is to replace the “n” in Nick’s name with a “d." It’s provocative, and ABC usually doesn’t go that deep or that dirty. Is the franchise turning a new double entendre leaf?

Secondly, Nick has a contestant, Liz, with whom he has already hooked up with before the show — the two met at Jade and Tanner’s wedding, and they spent the night together. This is not a big deal to me, but it was interesting to see it revealed on night one. What I hope for is that Nick and Liz address it, move on, and she continues through the show. I don’t want her to get the “stalker” or "clinger" edit. I know that the producers will use Liz and Nick’s past relationship as fodder for drama — This past tryst is the Chekov's hookup of Nick's season — but the fact that sex has been brought up this early in the season makes the whole process feel different.

Things will also be different this season because of who the Bachelor is. Nick is not Juan Pablo, and doesn't have a history of shaming women for acting on their feelings. In fact, he defended Kaitlyn on Twitter after their sex episode aired.

Between him standing up for an expression of sexual desire and his history on the show, I have a feeling this season will be different in a great way. Maybe it’s because we know that Nick has had sex with at least two (maybe three, because I’m not sure about him and Jen Saviano) women on the other Bachelor shows. We know Nick is a sexual being, so why hide it? This isn’t an “aw shucks” Ben Higgins situation, who seems as sexual as a piece of bread. Nick’s passion has been seen before, so why hide it? Nick’s season of The Bachelor is already more sex-positive than seasons past, so I hope it continues on this path — and with Nick in the driver's seat, I'm pretty hopeful.