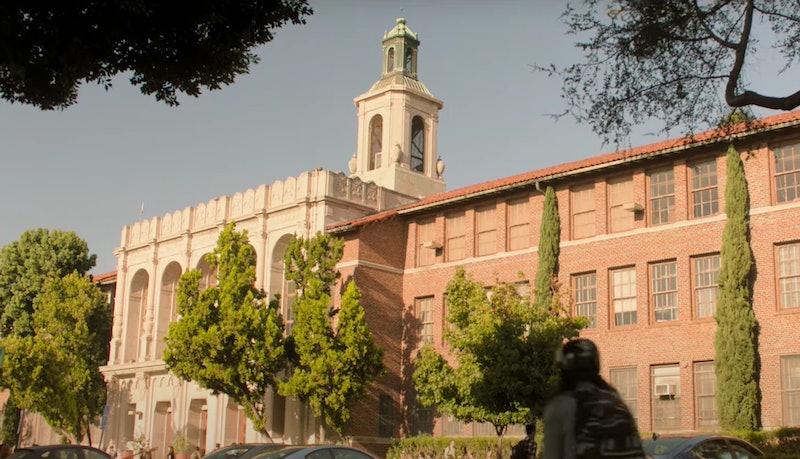 Love, Victor — the television spinoff of the hit movie Love, Simon — has a lot in common with its predecessor. Both iterations feature a high school student struggling with their sexuality, have storylines involving digital pen pals, and also take place at Creekwood High School. So, having now served as the backdrop for a much-beloved film, the original book (Becky Albertalli's Simon vs. the Homo Sapiens Agenda), and television series, it's worth digging a little deeper to ask: just what is Love, Victor's Creekwood High School based on?

Creekwood serves as the center of life for Victor (Michael Cimino), who, by the time we join him in the series, is transferring to the school after his family moves to Atlanta, Georgia from his home state of Texas. Not only does he have to contend with being the new kid, but he also has to grapple with two astounding new crushes at his brand new school: one on musician and heartthrob Benji (George Sear) and another on Creekwood's resident popular girl, Mia (Rachel Hilson). Judging by the trailer, his meet-cutes with both of these crushes happen right in the halls of Creekwood — once again, illustrating just how central Creekwood is to Victor's entire story.

And to find the inspiration for Creekwood High you don't have to look much further than the original novel. Its writer, Albertalli, is a native of a suburb just outside of Atlanta, Georgia called Sandy Springs. According to 11 Alive, Albertalli based Simon vs. the Homo Sapiens Agenda (and Creekwood itself) on her own high school, Riverwood International Charter School. Additionally, Love, Simon was shot on location in a few Atlanta-based schools, including Grady High School, Marietta High School, and Atlanta international School. It was important to film on-location, as the film's director, Greg Berlanti (Riverdale, Legends of Tomorrow, Chilling Adventures of Sabrina) explained to 11 Alive: "We weren't trying to film Atlanta as Philadephia or Vancouver. It was Atlanta for Atlanta, which was great."

While Love, Victor filmed on location in Los Angeles the spirit of Riverwood International Charter School's fictional alter ego, Creekwood, is alive and well — remaining just as integral to the series as all the previous iterations of Albertalli's novel before it.