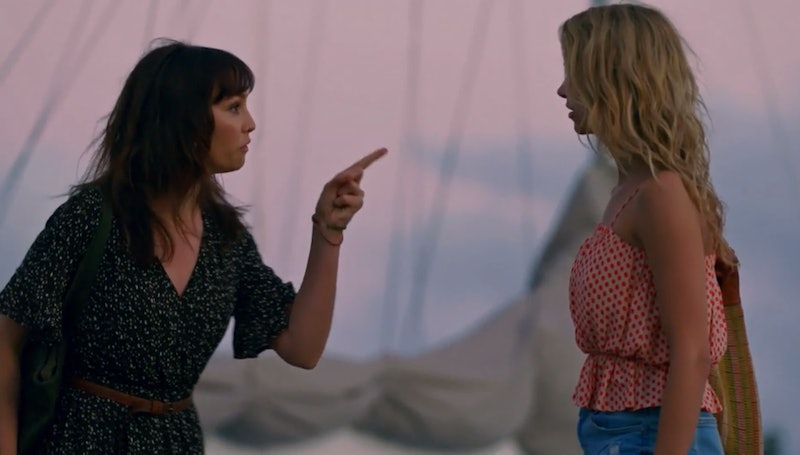 Nothing will make you want to cancel a vacation faster than a Lifetime movie. Fans are just getting over The Wrong Cruise and now the network is back at it again on Oct. 26 with Dangerous Matrimony, which is not based on a true story, thankfully. But, this flick's plot has the perfect dose of juicy drama for a Friday night.

Per the synopsis, Rob Mayes portrays David Dolan, an uber-rich businessman whose lavish vacation with his new wife Bridget (Sabina Gadecki) goes horribly wrong after he is kidnapped by unknown enemies. Of course, the kidnappers want ransom money and it's up to his assistant Portia (Emily O’Brien) to negotiate the terms and uncover the kidnappers' identity. This intense situation is definitely outside of her job description.

The Dangerous Matrimony trailer doesn’t give a ton of information, but there's enough intrigue to make viewers tune in for the full scoop. Portia confronts David about her concerns over his fast-moving relationship with the blond and beautiful Bridget.

He responds by asking why she’s so suspicious and Portia says she doesn’t want to him to get burned by this relationship. This moment appears to be heavy foreshadowing about Bridget’s involvement in the scheme but hopefully the movie will throw in some unexpected twists. It is a Lifetime film, after all.

Portia’s instincts seem to be proven correct when Bridget is conveniently shown shoving money into her purse right before the kidnappers snatch David. Portia arrives on the scene and immediately accuses Bridget of being involved in some way. David reaches out and lets them know that he is being held for ransom, which is revealed to be a paltry 1 million dollars.

Portia has one day to gather the cash before David will presumably die. The ending gets a bit more nebulous with Portia talking to an unknown man about holding up her end of an agreement and Bridget wrapping her arms around another man.

It kind of makes sense for Portia to take charge in this situation. Based on the clip, she has been David’s assistant for a while so she knows way more about him than his new wife. Portia has the connections via David to acquire the money and can use her knowledge about his business to find out who is behind this crime.

There’s also a hint of her having unrequited feelings for David so she might be invested in his safety for personal reasons. Or, perhaps this is her plot to somehow frame the new wife for a crime so she can take her place. Anything goes in a fictional drama, right?

Bridget could have easily come into his life and lured him into this trap. But, this plan would not have required her to marry David. And, why do the kidnappers only want 1 million dollars for someone who is ridiculously wealthy? If you are going to commit a criminal act, then go for the gusto and add a zero (or two) to the amount. There are so many questions and the only way to find out the truth is by tuning in to see if Portia can beat the clock to rescue David.

More like this
Here’s Where You Can Stream 'Schitt's Creek' After The Comedy Leaves Netflix
By Brad Witter
If 'Entergalactic' Season 2 Happens, You Could Get A New Kid Cudi Album
By Kadin Burnett
'Ramy' Will “Probably” End With Season 4, According To Ramy Youssef
By Brad Witter
'Reservation Dogs' Season 3 May Finally Mend Bear & Willie Jack’s Relationship
By Gretchen Smail
Get Even More From Bustle — Sign Up For The Newsletter