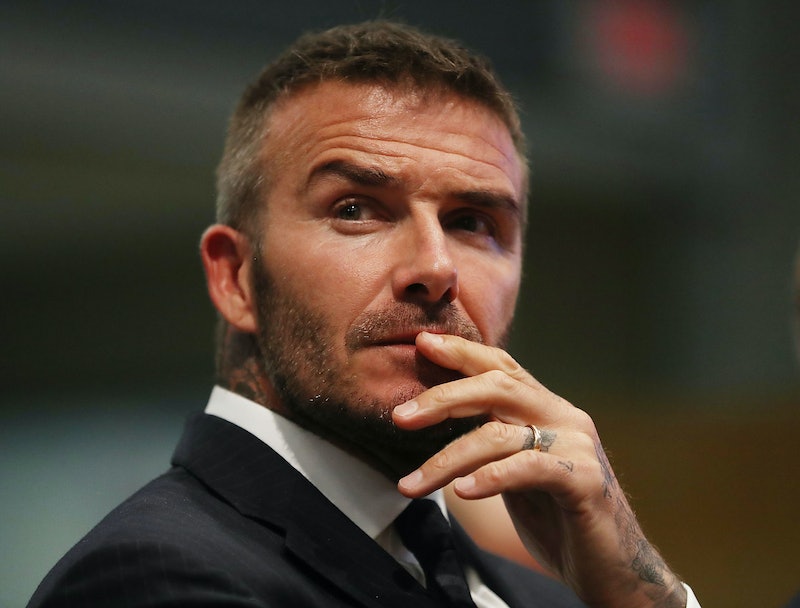 Footballer, style icon, businessman... actor? When David Beckham started Instagramming live from the set of Peaky Blinders season 5, it got people talking. Would the former England captain be adopting a Brummie twang and flat cap? I'm not sure which I'd be more excited about. But sadly, before you get too excited wondering if David Beckham is in Peaky Blinders season 5 I have some bad news. All is not what it seems.

As reported by Digital Spy, the BBC have confirmed that Beckham does not have a walk on part. A rep for the show told the site "We are not aware of David Beckham appearing in series five of Peaky Blinders." Gutted. A Beckham/Shelby alliance is exactly what 2019 needed. Turns out he was actually there in the name of fashion. Becks is a partner of English clothing brand Kent and Curwen and has released a line in collaboration with the show, the Independent reports, saying "I'm a big fan of the show and our brand has always been about the look." Sadly, as Digital Spy reports, he was just on set for a visit.

Now, as The Sun have reported, rumours have been swirling Becks would appear on the show, so admittedly when I first saw the snaps of Beckham on his Insta stories I was a little confused as to whether he was wearing his "costume" or wearing his normal trendy clothes. He's renowned for being so a la mode so this look didn't seem like a huge stretch from his usual dapper self. But I think I can be forgiven for thinking this because he's wearing Kent and Curwen. Phew.

Kent and Curwen's A/W collection debuted at London Fashion Week and you could see Peaky Blinders staple pieces like granddad caps, waistcoats, and shirts (all DB staples as well). Beckham revealed in an Instagram post that he had even called the capsule Garrison Tailors, which is the name of the infamous Shelby Birmingham pub. Beckham also serves as a model for some of the campaigns, because who better to model a clothing range than David Beckham. Seriously, though, I'll wait.

In Beckham's Instagram stories you can see him taking selfies with portraits of Tom and Arthur Shelby, wearing his '20s inspired designer look. He also posed for photos with the crew, captioning a pic "Amazing day on the Peaky Blinders set Big thanks to creator, Steve Knight and the crew for looking after me. Excited for season 5," which made it seem as if he was set to make a cameo. That's right DB, play with our emotions why don't you.

In 2015, Beckham boldly said that acting was "just a bit of fun" and he was not looking to venture into a full time acting career. Since one of his best friends is award winning director Guy Richie, he has made cameos in The Man From Uncle and King Arthur: Legend of the Sword. However, his acting skills were slammed in King Arthur, with Telegraph film critic Robbie Collin saying "[he] shows just about enough dramatic range to have played the stone the sword got stuck in". Ouch.

Oh well, looks like we'll have to wait a bit longer for David Beckham's return to the screen. But good news for Peaky Blinders fans; season 5 is expected in spring or summer this year, Digital Spy reports, and to top things all off, director Otto Bathurst has confirmed to Yahoo Movies, that there is even a Peaky Blinders film in the works.