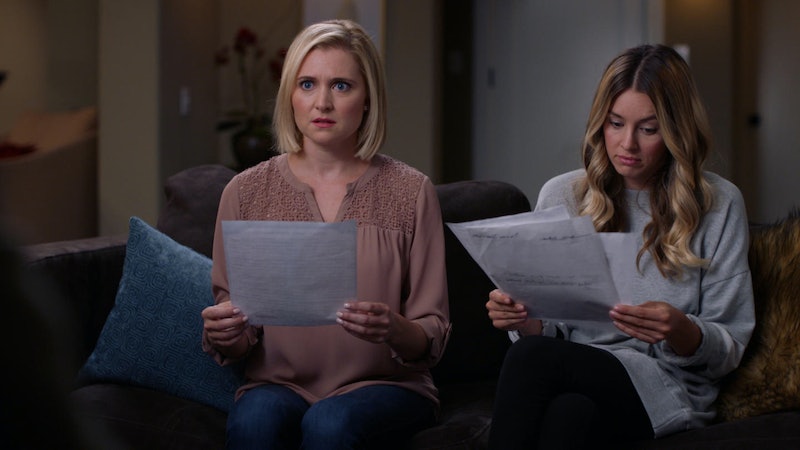 Lifetime's latest movie promises to be killer. Deadly Matrimony premieres Sunday, May 20, and appears to be a gender-flipped, less comedic take on the 1993 Mike Myers movie, So I Married an Axe Murderer. The film focuses on a woman named Sara (Katherine Bailess) and her new husband, Leo (Damon Dayoub), who she suspects is hiding secrets from her. With such a creepy plot, audiences may be wondering if Lifetime's Deadly Matrimony is a true story.

Although the film shares a title with a 1992 made-for-TV movie that, per the Washington Post, was based on real-life events, Lifetime's own Deadly Matrimony doesn't appear to be a true story, nor does it seem to have anything but the title in common with this other film. For one, the characters in the 1992 movie are named Alan and Dianne Masters, while the husband and wife in this version are Sara and Leo. Not only that, but the OG Deadly Matrimony is about a Chicago lawyer who murders his wife, and per the below NBC promos, it appears as if the film mainly focused the aftermath of the murder. The 1992 movie starred Treat Williams as Alan Masters, and Brian Dennehy as Sergeant John Reed, the police officer trying to put him behind bars.

In the Washington Post interview Williams said that the movie should be viewed as "inspired by a true story" as opposed to being a straight reproduction of any real events. "I would not say that all these events actually occurred," he continued. I think an audience is intelligent enough to realize that this is a fictionalized account." That being said, Alan Masters was indeed a real person and died in prison in 2000, according to the Chicago Tribune. He had been convicted of "conspiring to kill" his wife, and also found guilty for several corruption-related charges. The U.S. Supreme Court refused to hear his appeal.

As for the 2018 Deadly Matrimony, it was originally called He Loved Them All, then Vows of Deceit, which it's still listed as on IMDb. The synopsis there reads, "When blushing bride Sara Ross ties the knot with her seemingly perfect, handsome newlywed husband Leo, she soon starts to suspect that not only is Leo a thief and a conman but also quite possibly a killer, and that she just might be the next bride up on his chopping block." The phrasing "next bride" seems to imply that Leo has not only killed other women but also married them first.

Unfortunately, Deadly Matrimony's synopsis doesn't drop too many other clues as to what happens, but, by the looks of the trailer, it seems like Leo is a serial killer and that Sara is his intended next victim. "He's done this to a lot of women," Sara says in the promo with a determined look on her face. "Not anymore."

Bailess is best known for her role as Kyle Hart on the BET dance show Hit The Floor, which also stars Dear White People's Logan Browning. Before that, however, Bailess played a character named Erica Marsh on several episodes of One Tree Hill, and was even in two episodes of Gilmore Girls.

As for Dayoub, who plays Sarah's good-for-nothing husband, Leo, he recently played a firefighter named Cordova on the NBC drama Chicago Fire. Previously, the actor played Detective Quincy Fisher on Stitchers, a show on Freeform, and has also appeared on Grace And Frankie and NCIS.

In addition to its two stars, Deadly Matrimony also features Tiffany Hines, who appears on Hit The Floor alongside Bailess. Rounding out the cast is actor Keeley Hazell, who plays a character named Cindy Steele, and Terri Ivens, who plays Detective Mason. The Lifetime movie was directed and co-written by Jake Helgren, who seems more excited than anyone for fans to see the film.

Luckily, fans won't have to wait much longer for the next Lifetime drop. And since this version of Deadly Matrimony isn't grounded in real life, there's hope that this blushing bride will get away — and maybe even get revenge.