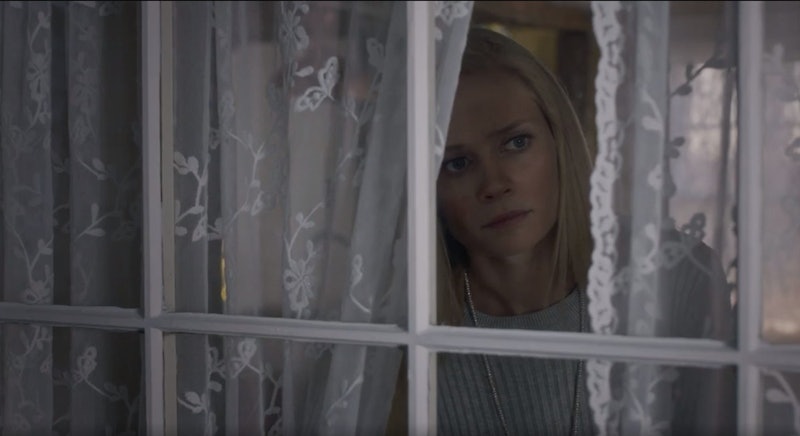 Relationships in Lifetime movies usually end with an epic fight to the death. Deadly Shores, premiering on Aug. 24, seems to be no different than its predecessors with a story about a woman who finds out her new husband has a dark and deadly past. But is Deadly Shores based on a true story, or is it just another wild fictional drama by Lifetime? Thankfully, there is no indication that this happened for real, but the plot is everything you would expect from a Lifetime summer flick.

This movie’s title definitely fits the official plot synopsis. The story follows a woman named Anna (Carly Schroeder) who just married a famous mystery writer (Phillip P. Keene). She moves with him to a remote island, but quickly discovers that there something is amiss with its residents, including her new man. Anna also finds out a few secrets about his deceased former wife and believes she will die next. Yep, she’s absolutely going to have to fight for her life to escape these deadly shores.

Deadly Shores' trailer is just as strange as the plot synopsis. Anna arrives at on the island and meets a few locals who give off The Truman Show actor vibes, but in a much more sinister way. She later tells an unidentified man (perhaps her husband?) that someone wants her gone.

The end of the short clip shows Anna trembling on the floor like she is being possessed and acting strangely as she lurks around a corner with blood on her cheek. She has an evil smile on her face and is later seen bashing an unseen person in the head with a blunt object. Her husband makes a few appearances, including him creepily saying the classic “honey, I’m home” line, which further adds to the intrigue of this murderous tale.

Carly Schroeder posted about her upcoming role on Instagram and said Anna’s strange state of mind stems from manipulation and abuse. These experiences will push her to the limit and become a driving force in Deadly Shores. It sounds like an awful ordeal, but at least this is just another far-fetched story solely for Lifetime fans’ entertainment.

The trailer and plot do leave room for so many questions. Is Anna possessed by an evil spirit? Who is this other woman who seems to know Anna? Is her husband’s former wife really dead, or does she play a role in this drama? Does her husband create these murderous situations as real-life inspiration for his mystery novels? How the heck is she going to escape this deadly island full of psychopathic people? Or, is there some unexpected plot twist that actually makes her the villain in this movie? There’s a lot to be explored in this dark film.

Grab your snacks, a comfy blanket, a glass (or three) of wine, and watch how it all goes down when Deadly Shores makes its debut. It may not be based on a real-life story, but it’s sure to be yet another wild Lifetime movie with unexpected twists, juicy secrets, and the inevitable final showdown to defeat a murderer.

More like this
'The Sandman’s Ending Is A Departure From Neil Gaiman’s Comic Book Series
By Kadin Burnett
The Bestselling Novel 'The Doll Factory' Will Be Adapted Into Thrilling TV Series
By Catharina Cheung
'Bridgerton' Newbie Hannah Dodd Has Thoughts On Colin and Penelope’s Love Story
By Bustle UK
'Bridgerton’s Jonathan Bailey & Simone Ashley Just Teased A First Look Of “Kanthony” In Season 3
By Grace Wehniainen, Alyssa Lapid and Sam Ramsden
Get Even More From Bustle — Sign Up For The Newsletter