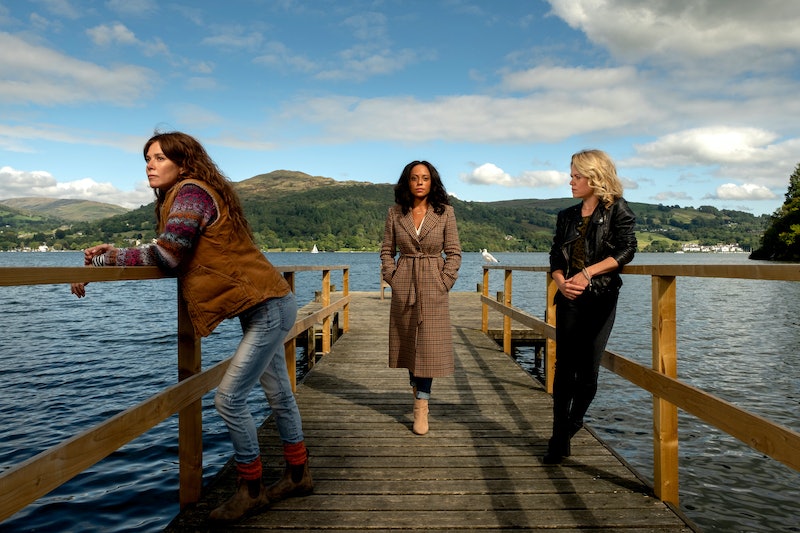 ITV haven't been shy when it comes to creating some addictive dramas in recent years. Shows like the gripping, dark, and brooding Broadchurch have kept viewers hooked. And not only that, they've kept the office water-cooler chats lit AF. Not ones to let the ball drop, the network has been busying themselves creating a new show, Deep Water, that is sure to get the nation gabbing. As a matter of fact, I'm almost sure people will be wondering is Deep Water based on a true story? Because the storyline for this new series is totally wild, but also kind of realistic.

But what exactly is the storyline for Deep Water? Well, it's all about the lives of three women, their struggles, and a heck of a lot of secrets. More on that later.

The show is based on the fictional books by British author Paula Daly known as the Windermere series. Both the books and the TV show are set in the Lake District, which is where Daly lives with her husband, their three children, and a sweet little whippet called Skippy, according to her Penguin Books bio page.

So I guess it's fair to assume the only thing that's true to life here is the breath-taking scenery that is seen throughout ITV's Deep Water. However, I have reached out to Daly's publicist to see if they can shed any light on other potential IRL influences. I'll let you know if I hear word back.

The high-drama and emotion-filled Deep Water stars the exceedingly talented Anna Friel, Sinéad Keenan, and Rosalind Eleazar. Their three characters are seemingly ordinary family women just living their lives, when they suddenly find their worlds turned upside down. And each of them is forced to make some difficult decisions in order to keep them and their families afloat.

Friel plays Lisa, a woman with a heck of a lot on her plate. Juggling not only motherhood but also running a dog kennel business. Both of which are made even more challenging as her husband works all hours as a taxi driver. Her life is sent into a tail spin after meeting the brother-in-law of Kate, one of the other protagonists in the show.

Kate, played by Eleazar, is the seemingly uber perfect mum out of the three. Of the women, she seems to be the one who has everything you could ever wish for. She's wealthy, gorgeous, and has a perfect husband and two young children. But, as with a lot of people who seem to have it all, everything is not as rosy as it seems.

Having once been the head of a thriving physiotherapy practice, Roz, played by Keenan, is now crippled by debt owing to her partner Winston's gambling addiction, which has left them on their knees financially. As she watches her whole world fall apart, she receives a proposition from a wealthy client that could solve all her problems. But it comes with its own price tag.