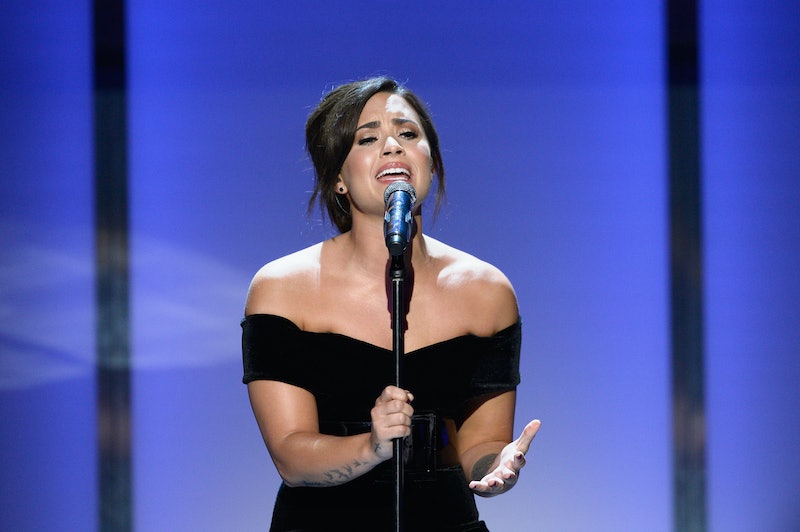 It's award season and you know what that means for high-profile musicians: accusations of lip-syncing, especially for the biggest performances. So if you're watching this weekend's most compelling show, you might be asking yourself, is Demi Lovato lip-syncing at the Grammys? Same. I'm not suggesting that Lovato is well-known for lip-syncing (quite the opposite — we'll get there in a second), but the Grammys have a relatively long history of something that's easy to confuse with lip-syncing: track augmentation.

In 2012, Michael Abbott, the audio coordinator at the event, spoke to TV Technology about the accusations:

"While we don’t allow lip-synch on the show, some performances are so demanding in terms of sound design that there has to be some of what we call track augmentation, which might involve Pro Tools or some other kind of playback. We do allow the artist to have their vision of what they should be looking and sounding like produced accurately, just as they do in concert. That can be a real challenge on live TV."

But rest assured, Lovato is almost certainly doing everything in her power to prevent accusations of lip-syncing. There's virtually no videos online accusing her of lip-syncing and the ones that do seem to be of questionable judgement. Lovato herself has been pretty crystal clear about her stance on the topic:

Besides which, think of the context. She's nominated for Best Pop Vocal Album for Confident — what could be more humiliating than having your lack of confidence in your powers as a singer exposed on live television? (Which isn't necessarily why people lip-sync. But that misconception often sparks criticism.)

Actually, in the past, Lovato has been accused of the opposite: of being so opposed to lip-syncing that she's seemingly sung out of tune in public, as in the video below. But to do Lovato justice, singing on television in front of an audience of potentially millions of people is a pretty intimidating thing to do. Just as you may not be the best teacher or dentist or copywriter (or whatever your job is) every day of your life, maybe pop stars are human, just like us, and sometimes have off days:

So no, I doubt very much that Lovato will be lip-syncing this Grammys round. In my opinion, she's too committed to being the best singer she can be without any technological assistance.