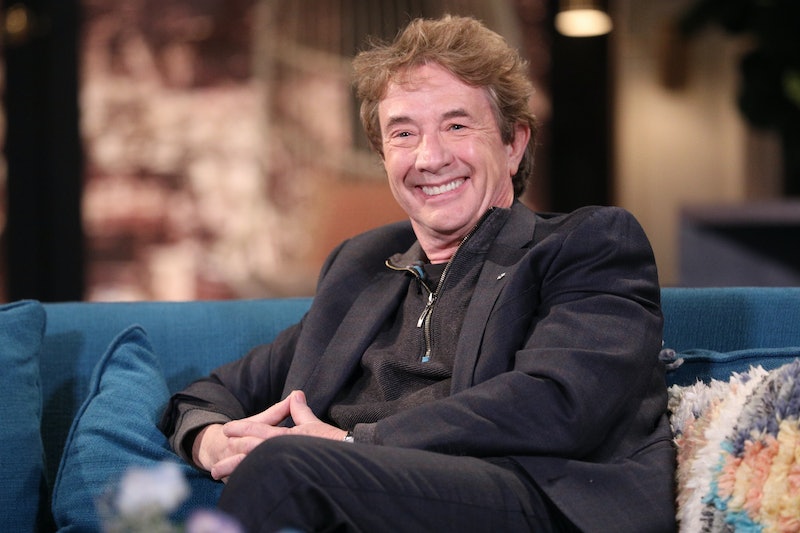 Spoilers ahead for The Morning Show Episodes 1-3. The Morning Show's inciting incident is TV anchor Mitch Kessler (Steve Carell) getting fired for sexual misconduct. Insistent that he's done nothing wrong and enraged that his reputation has been damaged, he decides to commiserate with Martin Short's Morning Show character Dick Lundy, a director who's been similarly affected by the #MeToo movement. The cast has been pretty clear that none of the characters are directly based on real people, so the same is assumedly true for Dick. But certainly, he opens an important dialogue in the show.

When Mitch and Dick begin talking, they're clearly on the same page about their accusers and their own culpability — which is, in their eyes, not much. "This whole #MeToo thing is so f*cking puritanical and myopic, and no one is addressing it!" Mitch whines. "A woman can say one thing about you — doesn't matter what her motivation is — and everything you've done in your life, gone. Your career, erased."

The longer he talks with Dick, however, the more clear it becomes that Mitch views himself and his behavior in a separate (and more acceptable) category. He's visibly taken aback by some of the things coming out of Dick's mouth — that there's "nothing sexy" about consent, that he's glad the statute of limitations works in his favor — and tries to explain the different "waves" of the #MeToo movement. The second one is different than the first, he argues, and functions in a much grayer area.

"You are actually a predator, and people are going to want you to own that," he tells Dick. When Dick retorts, "As opposed to — what are you exactly, Mitch?" Mitch doesn't answer.

Based on Dick's comments about being with underage women (he alludes to sleeping with a 15-year-old), the show seems to be using him as a stand-in for alleged sexual predators like Woody Allen and Roman Polanski, both directors who've been accused of raping minors. Allen, who's repeatedly denied the claims made against him, was accused of sexually abusing his adoptive daughter Dylan Farrow when she was a child. And Polanski pled guilty to unlawful sex with a minor after a 13-year-old girl claimed he assaulted her in 1977 (he spent 42 days in jail, then fled to France the day before his sentencing was meant to take place; he's lived outside of the U.S. since).

We've yet to learn more about Dick's background or who he may be meant to embody, but ultimately, he's only there in service of Mitch's storyline. The Morning Show is, in many ways, too gracious to the disgraced anchor, but this conversation is one of the first times he's forced to genuinely consider his actions — which, even if he doesn't come away with any more remorse, is worth seeing.