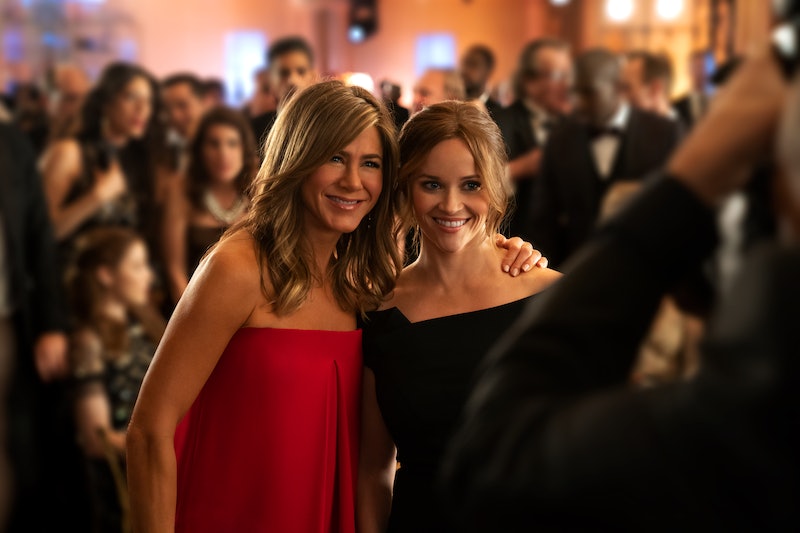 The Morning Show, which starts streaming on Apple TV+ Nov. 1, begins with a moment of reckoning that's all too familiar to anyone who has even remotely been paying attention to the news in the past few years. In the pilot, morning show host Alex Levy (Jennifer Aniston) learns that her co-anchor of 15 years, Mitch Kessler (Steve Carell) has been fired for allegations of sexual misconduct. Mere hours later, it's Alex who has to deliver the bad news to America, looking straight down the barrel of the camera to reassure viewers that everything is going to be OK before shedding a few tears of her own.

It's an incredibly timely premise — one that was worked into the show when the #MeToo scandal picked up steam — and The Morning Show director and executive producer Mimi Leder wanted to truthfully examine how one man's actions can affect so many people beyond those who accused him of misconduct without shying away from the real-life parallels. "We grounded everything very much in reality," Leder tells Bustle. So yes, any similarities to Savannah Guthrie's on-air announcement of Lauer's Today Show termination following allegations of sexual misconduct (which he has denied) likely aren't a coincidence, though Leder and those involved in the show have insisted that Mitch isn't based on Matt Lauer specifically.

"I wanted you to relate to this woman who delivers this news and I wanted you to trust her," Leder says, though it isn't all that hard to do so when everyone's favorite Friend is the one tasked with breaking the bad news. "And then I wanted you to see her behind the camera, completely losing it. You see the fear, and that was what was exciting to me."

What's also exciting, and sometimes frustrating, is watching The Morning Show's characters grapple with the same #MeToo questions and concerns as its audience. Like us, these characters don't have the answers to what should happen to the men accused of sexual misconduct or how to stop this kind of abuse from ever happening again. And that's because the show's writers are still processing what has happened over the past two years.

When Leder signed on to the Apple series there wasn't a script, "which I’ve never done in my entire career," she admits. The show was initially pitched as a behind-the-scenes look at the cutthroat world of morning shows using Brian Stelter's 2013 book Top of the Morning as its source material. Then the Harvey Weinstein report broke while they were writing the script; shortly thereafter, time was up for morning show anchors like Lauer, prompting The Morning Show to change course. "We could not and did not want to ignore #MeToo as part of the show," Leder says. "It’s not all of the show, but it’s definitely part of the show."

There's no denying it's a big part of it, but Leder prefers to think of The Morning Show as "a work of fiction, deeply researched, but really rooted in a lot of true life experiences." For her, it's a character study that delves into how Mitch's co-workers handle this crisis. For Aniston's veteran journalist Alex, that means a lot of initial anguish before she begins to find her power and maybe a new partner in Reese Witherspoon's Bradley Jackson, a spitfire small-town journalist who can't seem to get out of her own way.

"The show really gets into examining power and control and the lies we tell ourselves."

"It’s almost structured like a love story between these two characters colliding at very different points in their lives," Leder says. "One’s on a professional plateau, and one’s really hungry to make her mark." They both couldn't be more different, both personally — Alex is a calming reassuring presence on-air, while Bradley is a like powder keg always ready to blow — and professionally. Viewers see this when Alex and Bradley go head-to-head over the role journalists should play in a story live on air. Ultimately, though, they both really want the same thing. "These two women are tired of people controlling them and their destiny," Leder says.

Alex and Bradley, like many other women, are trying to take control of their professional lives, but it's easier said than done. "Power is elusive," Leder says. "The show really gets into examining power and control and the lies we tell ourselves." The most important one may be thinking that we've got it all figured out in this not-quite post-#MeToo world.

More like this
Here’s What Happens To Bill & Frank In 'The Last Of Us' Video Game
By Brad Witter
The Plane Crash In 'Dear Edward' Is Based On A 2010 Tragedy
By Grace Wehniainen
24 History-Making Black Women You Probably Didn't Learn About In School
By Ayana Lage and JR Thorpe
25 Inspiring Quotes From Black Women To Celebrate Black History Month
By Kyli Rodriguez-Cayro and JR Thorpe
Get Even More From Bustle — Sign Up For The Newsletter
From hair trends to relationship advice, our daily newsletter has everything you need to sound like a person who’s on TikTok, even if you aren’t.