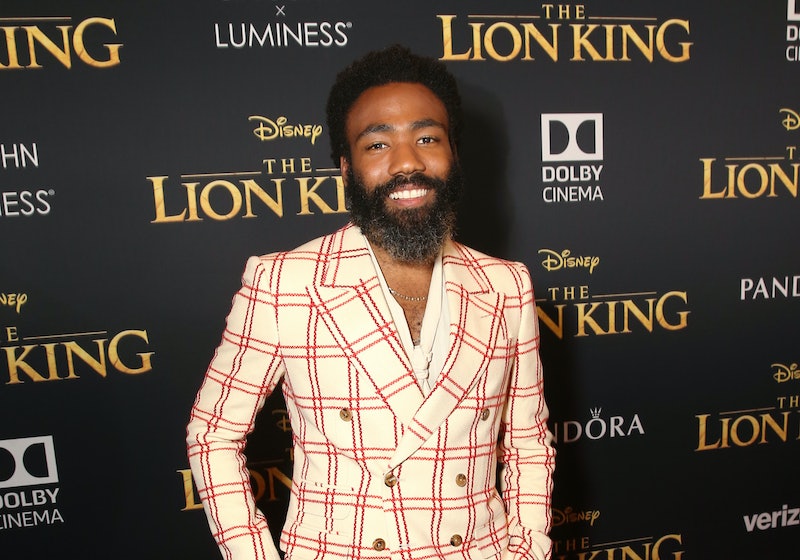 Donald Glover has a Golden Globe, two Emmys, and five Grammys under his belt. He's currently promoting The Lion King, where he voice adult Simba and duets with Beyoncé's Nala. Although you can find details about his work with a quick Google search, his personal life is a bit trickier. It's unclear if Donald Glover is married to Michelle White, his longtime partner, because he keeps things so private.

Not only is it rare to see White attend an event with him, but she appears to be absent from social media. Although Glover has a verified Twitter and Instagram account, his posts are scarce and include no personal photos. Not much is known about White, and it's unknown exactly when the couple started dating, but they welcomed their first son Legend sometime in 2016, according to Us Weekly.

On the topic of marriage, he has previously shown little interest in tying the knot. In the interview with The Hollywood Reporter back in 2017, Glover admitted that his childhood dream was to be a wedding planner, although he went on to say he personally doesn't believe in marriage, explaining, "It doesn't serve the purpose I would want it to serve."

Even so, some fans are convinced Glover and White tied the knot at some point in the past few years. Meanwhile, others continue to be surprised by the possibility and express disbelief.

Things get a little more confusing, because on the rare occasion he does talk about White, he usually refers to her as "the mother of my child," or his "partner." However, in July 2019 in an interview with Entertainment Tonight, Glover referred to White as "my wife." While Glover didn't appear to have misspoken, the interviewer didn't pry for more details on the subject. ET did note, though, that he wasn't wearing a wedding band in that same report. (Bustle reached out to Glover's rep for comment on the subject, but did not receive an immediate response.)

While he may not discuss his love life often, he's definitely opened up about his children on more than one occasion. In the same 2017 interview with the THR where he mentioned his view on marriage, Glover didn't speak in-depth about his personal relationship with White, but he did say, "I don't spend as much time with [my son] as I want to, but it's because I want to give him everything."

About a month later at the Emmy Awards in September 2017, he won two Emmys for his work on Atlanta. During Glover's acceptance speech, he took the time to thank White. He said, "I want to thank Michelle, my partner, you love me even with how crazy I can get." He went on to share that White was expecting their second child. “I want to thank my baby, my son, for just being the joy in my life. I want to thank my unborn son, we’re listening to Stevie tonight.”

After the arrival of his second son in January 2018, Glover shared with Entertainment Tonight exclusively how White was doing after giving birth, saying, "She's great. She's good. Baby's born, so she's happier now." That same month, E! News asked Glover if being a parent changed him and he acknowledged White in his response. He said,

"It hasn't. I think my partner, she takes all the hard stuff to be honest. That's not even bullsh*t... I haven't really had to change anything."

While Glover has been more open when it comes to his music and children, a lot is still unknown about the exact status of his relationship with White. But either way, he seems happy with his little family and that's what matters most.