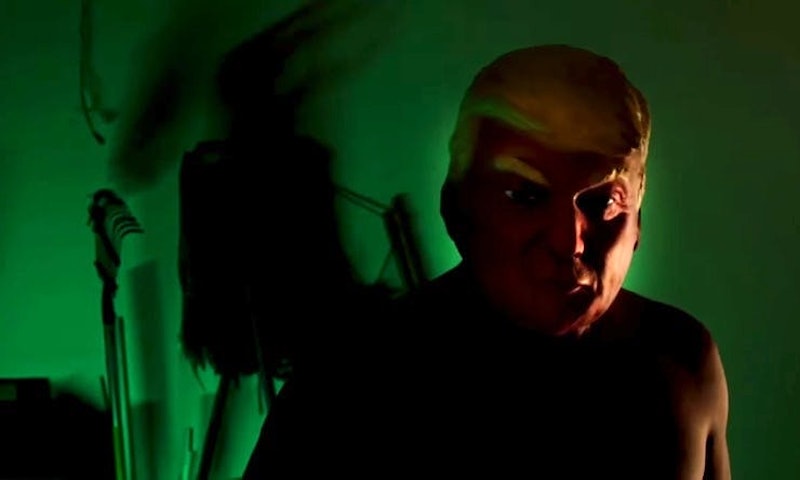 Season 7 of the anthology series, titled American Horror Story: Cult, premieres Sept. 5 and has been influenced by the results of the 2016 Presidential election. The newest trailer and a sneak peek at the opening credits show that not only did Donald Trump's win provide inspiration, it actually sets the horrific action of the season into motion. Since his presidency will be at last part of the focus of much of this season's events, is Donald Trump watching AHS: Cult?

Obviously I can't say for absolute certainty whether Trump will be tuning in to catch Sarah Paulson, Evan Peters and the rest of the casts' inevitably brilliant performances, and I can find no proof that anyone has directly asked the president. Bustle has reached out to the White House, but has not received comment. But past behavior can certainly give some insight as to whether he will be watching or not. Before I make an educated guess on this, let's analyze the role that Trump and his presidency will actually play in this season.

To begin, the opening credits not only finally bring back the beloved theme song, but it actually showcases anonymous people in Hillary Clinton and Donald Trump masks. The person donning the scowling Trump mask seems to be a shirtless male and he merely puts the mask on and turns to face the camera. Whoever wears the smiling Hillary mask is seen wagging their finger at the camera, as if to say, "No, no, no." Take what you will from that.

The trailers that were released for this season further provide some detail into what role the election will play in the terror that follows. The season begins in Michigan 2016, where characters played by Peters and Paulson watch the election results, experiencing wildly different reactions. Upon hearing Trump has won, Peters' character is thrilled and begins emphatically humping his television, while Paulson's character and her wife (played by Alison Pill), break down in horrified sobs. Another moment has Peters in a voiceover, saying, "If you get people scared enough, they will set the world on fire." Some may see this declaration to be a reference to Trump's campaign and some of the messaging that critics like The Atlantic's Molly Ball perceived to be capitalizing on the fears of his base — especially of anyone who may be different.

Now, back to Trump's penchant for seeking out unflattering portrayals of himself. As The Washington Post reported, Trump adorns his various offices and homes with any and all magazine covers featuring his face on them. (Including some that may have been mocked up on his behalf.) The guy loves to display praise directed at him. But does he indulge in the unflattering opinions as well?

Comedian Penn Jillette appeared on the 2012 season of Trump's reality show, Celebrity Apprentice, and in his book Everyday Is An Atheist Holiday!, he describes Trump's penchant for Googling himself. He writes, "When he was into his free-form rants in front of a captive audience, he would talk about articles written about him and defend himself against charges made, as far as I could tell, by random bloggers with a few hundred hits." Jillette further explained this puzzling habit of Trumps, saying, "It sounded like this cat was Googling himself, being bugged by what was written, and then defending himself to people who were trying to improve their careers by playing a TV game with him."

And of course, who can forget Trump's tweets about Alec Baldwin's running impersonation of him on this past season of Saturday Night Live?

Though at this point, there's no indication that Donald Trump will be portrayed by someone as a character on AHS: Cult, I just don't see how the current president could pass up checking out this season of American Horror Story. The fact that whatever fictional horrors will unfold will actually be kicked off by his election win could possibly make its way onto his radar. And if it does, past proof of Trump's fascination and anger with how he's seen in the media dictates that he likely won't be able to resist seeing what the show has to say about him.

No one can say for sure until he takes to Twitter, but my money is on Trump tuning into AHS: Cult.