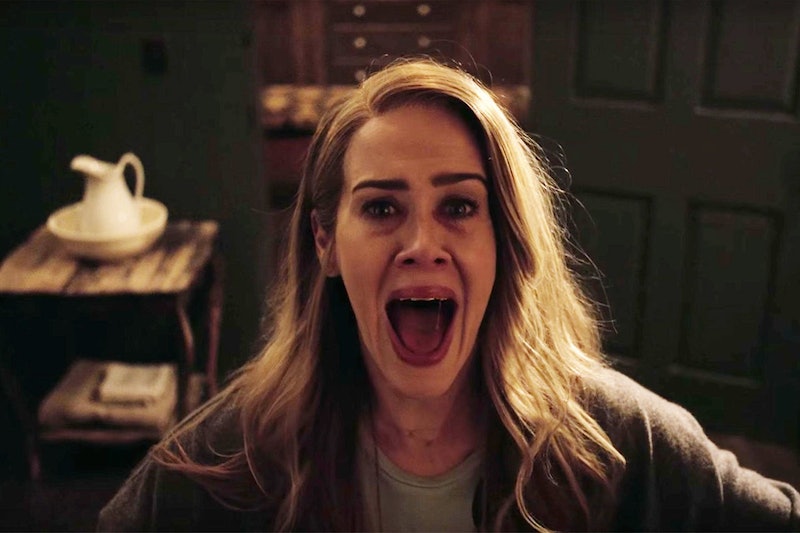 According to co-creator Ryan Murphy, American Horror Story Season 7 could focus on Trump. On Wednesday's Watch What Happens Live, Murphy discussed the forthcoming seventh season of the hit anthology series, and said, "the season that we begin shooting in June is going to be about the election that we just went through so I think that will be interesting for a lot of people." Wow, just wow. Not only is this theme unexpected, it's a great choice considering the series regularly explores the macabre. Having delved into numerous horrific and graphic situations, from serial killers to covens, it's interesting to hear that the 2016 election could be at the center of American Horror Story's next outing.

When asked for specifics by host Andy Cohen, Murphy wouldn't give away too many details, but did say that "maybe" Trump would be a character in Season 7. Although the next chapter of American Horror Story is currently untitled, its subject matter is completely apt, and it'll be fascinating to see how the show deals with 2016's iconic election. Whether or not Trump or Clinton will feature remains to be seen, but it's clear that the upheaval caused by the election, and the large number of controversies that President Trump's been involved in, could be excellent inspiration for horror.

Series regulars Sarah Paulson and Evan Peters will return for Season 7 of American Horror Story, and speculation has already started regarding who the pair could play. Otherwise, details regarding new episodes are scarce, though Murphy has revealed that all of the seasons are connected and the connections will become clearer throughout future seasons.

In Oct. 2016, Murphy told TVLine, that Season 7 has "a big hook behind it,” and teased that several Freak Show characters would feature in it. This is particularly exciting following the creator's election announcement. Season 4 of American Horror Story was set in 1952, while Season 7 is due to be set in 2016. How exactly the characters will crossover between the two seasons and timelines will be incredibly interesting to see.

While we wait for further announcements about the next season of American Horror Story, I'm off to write out a list of terrible, election-related stories that could form the perfect plot for the show.

More like this
Everything To Know About 'Firefly Lane' Season 2 Part 2
By Gretchen Smail
Everything To Know About 'The Peripheral's Potential Season 2
By Brad Witter
The 'Firefly Lane' Book Ending Teases Way More Tears To Come In 2023
By K.W. Colyard
This 'White Lotus' Symbol Could Hint At A Major Character's Death
By Grace Wehniainen
Get Even More From Bustle — Sign Up For The Newsletter