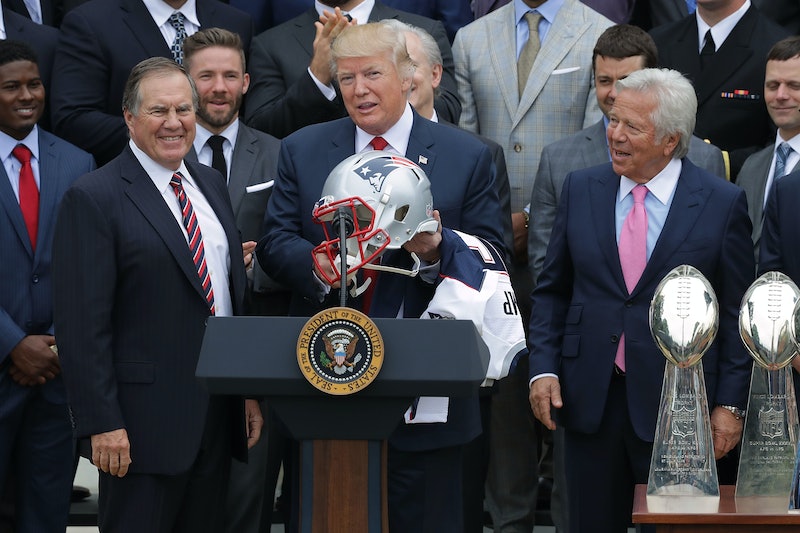 Like millions of his fellow citizens, the president plans on watching professional football's biggest game on Sunday, but he won't be doing so anywhere near the White House. Instead, President Trump's Super Bowl party will be in Florida, exactly where you might expect — at the Trump International Golf Club in Palm Beach, five minutes from where he's been staying at his Mar-a-Lago resort.

The Super Bowl showdown between the New England Patriots and the Philadelphia Eagles represents the biggest single day in television viewership in the United States. And the POTUS and First Lady Melania Trump will be enjoying the festivities, capping off a weekend away from Washington, D.C. by welcoming guests to watch with them at their Palm Beach digs, where they've spent the past two days.

Trump hasn't explicitly stated who he's rooting for, but given his personal relationships, it's probably the New England Patriots. Trump is a friend of Patriots' owner Robert Kraft, their head coach Bill Belichik, and perhaps most famously, quarterback Tom Brady.

But when asked to state his preference for Sunday's winner, Trump demurred. "I'd better not get involved," he said.

It may surprise some to learn Trump is not only watching the Super Bowl, but hosting a party for the event. He's been publicly critical of the NFL (National Football League) and several of its players over the past year.

The latest controversy isn't Trump's first skirmish with the NFL. He tried unsuccessfully to compete with the league in the 1980s by investing in the now-defunct United States Football League (USFL). While he eventually won an anti-trust lawsuit against the NFL, Trump was awarded just $1 for the trouble.

Then, Trump took issue with an NFL rule change in 2013. The league's response to growing concern over the development of serious brain injuries in retired players found no love from Trump. Referencing their rule change banning direct contact hits with helmets, Trump tweeted, "What is happening to the sport?" Further research since 2013 has found an all but undeniable link between chronic traumatic encephalopathy (CTE) and NFL football.

The relationship between Trump and the NFL frayed further when he attempted to purchase the Buffalo Bills in 2014. Trump went on Twitter afterward to say he "would have produced a winner" had they accepted his bid, calling the team's real sale price of more than a billion dollars "ridiculous."

The most recent hostility between Trump and the NFL arose after he criticized certain players' decision to kneel during the National Anthem. Begun by former 49ers quarterback Colin Kaepernick, the act of kneeling or sitting during the anthem was done in protest of police brutality and racial inequality in the United States.

But Trump inserted himself into the demonstration in September while speaking at a rally in Alabama. Seeming to speak off the cuff, Trump said that NFL owners would do well to fire players who knelt during the National Anthem. "Get that son of a bitch off the field right now, he's fired. He's fired!" Trump said. It was a remark many found troubling, with some arguing such comments were racially motivated, and led to much larger numbers of players who opted to sit or kneel in protest.

The controversy got some fresh fire on Super Bowl Sunday, with Trump issuing a statement in honor of American veterans that ended with the line, "We hold them in our hearts and thank them for our freedom as we proudly stand for the National Anthem."

Hostility between the football league and Trump may explain in part why he refrained from sitting down for the traditional pre-game presidential interview. But it hasn't stopped Trump from hosting a watch party at his South Florida golf club.