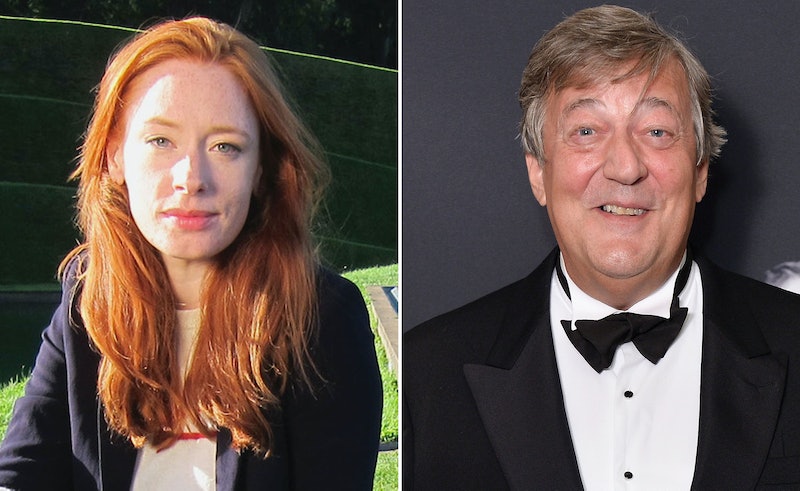 Cos, tan, sin, and all that jazz. Now, maybe not the most grabbing start to an article I understand. But oi mate, there is actually a buttload more to maths than being a spotty teenager pulling your hair out over X equals OMG what does this even mean and why aren't they teaching me how to do my taxes? Well that's where BBC4's new mind opener Magic Numbers comes in. A clever AF show with a familiarly named clever host has fans wondering, is Dr Hannah Fry related to Stephen Fry?

So, in this case, being a total braniac does not appear to be a family affair. Yes, Stephen is not the only Fry on the block anymore, but there is no evidence showing that these two are related. In fact, they don't even follow each other on social media. However, just to be on the safe side, I contacted their reps to be 100 percent sure. I'm still waiting on their response, however, as soon as they get back to me, you'll be the first in the know.

Although it would be cool AF to be related to Stephen, Hannah is totally bossing it on her own. In a sector which is not only male dominated, she is setting the maths world on fire. And her new documentary series Magic Numbers looks epic. It is all about the mysterious world of maths and examines whether maths was cooked up in the mind of humans, or served up as a ready meal from the universe.

The three-part series takes a peak at maths from a considerably more interesting angle than that of the antiquated text books, that don't necessarily appeal to most, and instead examines the world of maths that is, well, the world itself.

Mathematician Dr. Fry is certainly not your average TV host. When she isn't hosting insanely interesting shows on the BBC, she is an associate professor in the Mathematics of Cities at the Centre for Advanced Spatial Analysis at University College London. OK, wow, pretty cool. She has become an expert in studying human behavioural patterns — using mathematics alongside a whole host of other sciences, including geography and computer science. This research in the patterns of human behaviour, mainly in an urban setting, has translated to all sorts of social problems as well as questions that you might not even realise incorporate mathematics. Those such as transport and shopping to more scary things like terrorism and crime.

Hopeless romantics might recognise Dr. Fry's name from her TED talk The Mathematics Of Love which became a book The Mathematics Of Love: Patterns, Proofs And The Search For The Ultimate Equation, an absolute must read for those aiming to find love. Yep, even love, one of humanity's greatest mysteries is like, all about numbers. Say what? Yep. And this is from the point of a woman who has struggled in the past (like everyone) with the horrific world of dating.

In the study, she explains that a lot of mathematic research has been put into the world of love. Who would have thought maths could be so suave and interested in getting you a bae? The equation put forward by Dr. Fry is pretty straight forward; proud + proactive + provokable = love. So, basically, IMHO, this means be proud of yourself, go for what you want, and make sure if you argue that it is constructive.

Dr. Fry makes sense of a subject that often leaves people feeling alienated and will make you realise that numbers are not only everything, but they really are, well, magic.