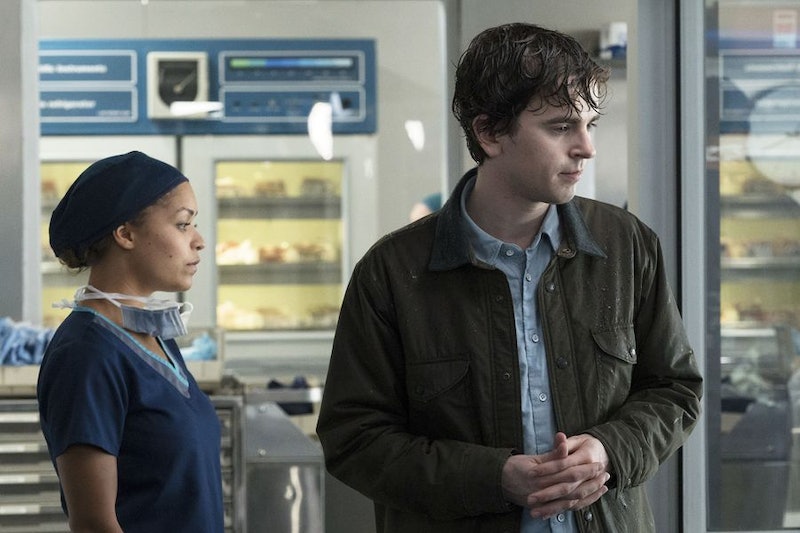 Another season of new television, another medical show set out to impress audiences with interesting doctors and even weirder cases of the week. This year’s medical drama du jour is The Good Doctor, and it’s creating some buzz due to the background of its main character. Freddie Highmore, most recently seen murdering people in Bates Hotel, is now saving lives as Dr. Shaun Murphy. But is Dr. Shaun Murphy from The Good Doctor a real person?

The premise of The Good Doctor is pretty straightforward — it follows Shaun Murphy, a young surgeon with savant syndrome and autism, as he relocates to join a prestigious and well-regarded hospital, San Jose St. Bonaventure Hospital. In the pilot, the hospital and its board are torn about having him there — some are worried he lacks the empathy and emotional intelligence needed to be a surgeon, and others are all like, “This person is a genius and deserves to help people.” The latter win out in the end, especially after a video of Murphy saving a boy after an accident goes viral. Whether it’s good publicity for the hospital or they believe in Murphy’s abilities remains to be seen, but Murphy earns a place in a cardiothoracic unit, and, since his boss is an arrogant doctor type (and Shaun calls him out on it, which was the most satisfying moment of the pilot), there will be drama.

This sort of story does indeed seem ripped from real life, but, in fact, Dr. Shaun Murphy is not actually a real person (Highmore is excellent in his role, though). Instead, the inspiration for The Good Doctor came from overseas, from a South Korean show called — you guessed it — Good Doctor. Producer Daniel Dae Kim, of Lost and Hawaii Five-0 fame, is Korean-American and liked the Korean show so much that he wanted to bring it to the United States. In an interview with The Hollywood Reporter, Kim said that Korean television is perfect for American audiences:

"There's something that Korean TV does that no other country does — the way they portray heartbreak and melodrama. In America, there are more serialized dramas and there can be room for something inspired by Korean TV, because I believe good content can transcend cultural barriers… I think I have a fairly good sense of what will translate and what won't."

So why choose Good Doctor to bring to the United States? The hospital setting is a universal one, and the idea of illness is something everyone can relate to. "It's something that can fit into a recognizable world, with a breadth of characters that can be explored in the long run," said Kim, who clearly believes in the show and its ability to transcend borders.

The show’s biggest battle isn’t that American audiences won’t connect — we all love a good medical drama — it’s that it has to finely walk the path of making their autistic lead character not fall victim stereotypes. But creator David Shore (he also created House and worked on NYPD Blue) claimed that it wouldn't be an issue. Per TV Line, at the Television Critics Association press tour, he said the show did research to make sure Shaun was always wholly formed:

“We saw a lot of documentaries. We consulted with people. We have people on the spectrum who we’re working with… [Shaun] is a very specific character. He’s not there to represent autism. The real challenge will be his communication skills… He can be right, and fail in communicating the information, which is crucial. There will be consequences for him not following protocol.”

Every medical drama has a doctor or two that doesn’t follow protocol, but these characters are rarely savant-level geniuses. How Shaun’s skill will impact his life at the new hospital remains to be seen, but, because he is not based on a real person, The Good Doctor has plenty of room to play — just so long as the show does it with respect to the autistic community at large.