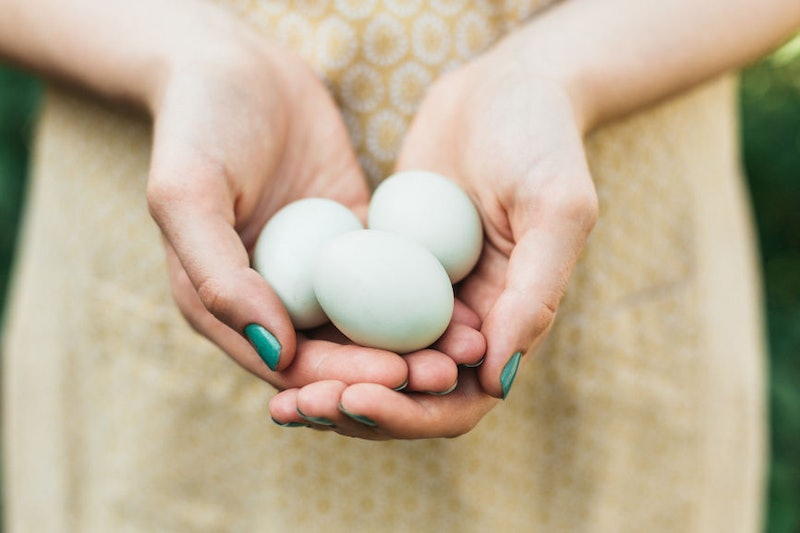 Korea has brought over a good many things to the Western beauty world, but one trend that is still yet to catch on is eggs. I'm not talking about having them fried, poached, scrambled, or boiled. It's more a case of smushing them all over your face. Alternatively, you could buy a skincare product from a brand that has already done the smushing for you. The question is: is egg actually good for your skin?

A bunch of skincare experts believe so. In fact, they believe that every single part of an egg comes with its own unique benefits. Take egg whites, for example. Also known as albumen, it can reportedly "remove sebum and dead skin cells, which leaves the skin clean, smooth, and firm," Charlotte Cho, founder of Soko Glam, told Allure. Cho also added that egg whites have the ability to moisturise and tighten pores.

However, not every authoritative mind supports this theory. According to Medical News Today, no scientific evidence exists to show that egg whites do anything useful for the skin. The site does point out that the central ingredient of an egg white is protein. It is this protein that is supposedly beneficial.

The yolk of an egg also receives a tick in the beauty books, according to some. Cosmetic chemist Ginger King told Self that the most colourful portion of an egg houses vitamins A, B, and D. This mixture is said to improve skin texture and combat the effects of dryness. Dermatologist Howard Sobel told the magazine that egg yolk can also lead to shinier hair.

Even the shell may help in some way. Containing calcium, the shell can be ground into a fine powder that has the ability to gently exfoliate skin, King explained to Self. Who would have thought it?

Although you can DIY your own egg-based face mask, it isn't the easiest thing in the world to do. "Applying egg raw can be very messy and smelly, so we use extracts which are safer because they can be used by everyone," Young Kim, creative director of Korean brand Too Cool For School, told the Daily Mail.

If you can't be bothered to tidy up afterwards, you could always try the brand's Egg Mellow moisturiser or Egg Mousse cleanser. To make things even easier, Too Cool For School has just launched in Boots. According to the paper, the brand's products had a waiting list of around 9,000 people, so it must be doing something right.

It's advisable to do a patch test before applying any egg-infused product onto skin — just in case of any hidden allergies. There is also an ethical viewpoint to consider. Lush recently announced it was removing eggs from all of its products, reports the Independent. The company had always used free range eggs, but, after visiting farms to check standards, concerns grew.

"What has become clear during this process is that there are some hard truths of egg production that are difficult to face up to," the brand wrote in a statement. These truths included the "hatching of millions of eggs at commercial hatcheries, the sorting of the chicks into the females to be sent on to farms to lay eggs, and the male chicks to go straight to their deaths by methods so brutal that it would be impossible to present on our website." Eggs have now been swapped for the likes of chickpea aquafaba, tofu, soya yoghurt, and wheat gluten.