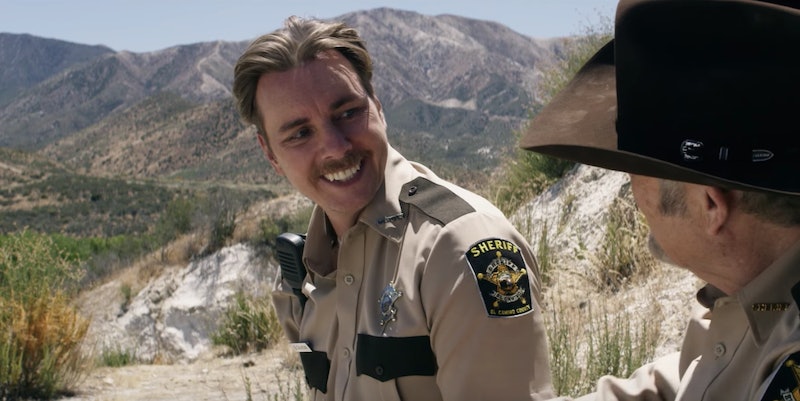 Netflix is moving on from gritty superhero shows and Stranger Things to the next frontier in original programing: Christmas movies. Like everything else on the site, El Camino Christmas, a new original film, is a darker take on the Holiday. But just because the movie isn't something you'd see on the Hallmark Channel doesn't mean El Camino Christmas is a true story. The dark comedy premieres on Netflix on Dec. 8, and it's safe to say that if it were a true story, we'd have heard about it.

El Camino Christmas takes place in the fictional town of El Camino, Nevada, where a young stranger, Eric (Luke Grimes), ends up inadvertently holding a handful of locals in a liquor store hostage. Those locals are comprised of a Larry Michael Roth (Tim Allen), a Deputy (Vincent D'Onofrio), and a young mother Kate (Michelle Mylett) and her child. Meanwhile, two somewhat incompetent (read: goofy) cops, Sheriff Bob Fuller (Kurtwood Smith) and Deputy Billy Calhoun (Dax Shepard), are waiting for him outside. As the situation tumbles more out of control, they're joined by other locals and even local television journalist Beth Flowers (Jessica Alba). Add in a few wacky subplots — Eric is looking for his long lost father, Larry is looking to drink his day away — and you've got the Christmas comedy you've been looking for.

The dark and messy humor of El Camino Christmas might sound like your average family Christmas dinner drama, but, unlike your Christmas get together, El Camino Christmas isn't a reality anybody had to live through. The idea from the film originally came from the mind of new screenwriter Christopher Wehner. (Co-writer Theodore Melfi, the scribe behind Hidden Figures, later joined the project.)

Wehner first started writing the script almost 20 years ago. Back then, it was called Warm Beer and inspired by an interview the writer conducted with a Vietnam veteran. "I started with the Vietnam vet character and Eric, and wrote a simple story about a liquor store hold-up," he told Screenwriter's Utopia. As Wehner slowly broke into Hollywood, he continued working on his screenplay by himself, until finally he met Melfi, who bought the script and continued to work on it with Wehner. "Ted then worked on it and did some wonderful things. He removed a couple subplots that were distracting. Enahanced the main narrative thrust of the story, soften some of the characters' darkness, enhanced the humor," Wehner revealed. Even though Melfi changed his original script, Wehner added that he was pleased with the results, saying, "I mean he's an Oscar nominated writer. What else is there to say?"

Selling a script and getting it made are two very different things, however, and it took a few rewrites from Melfi and then a decade of selling the movie to studios before it was actually realized on screen. "El Camino Christmas is something that I started 10 years ago when I bought the script from Chris, and I have been trying to make the movie ever since," Melfi explained in an interview with Deadline.

The end result is a dark, wacky, vaguely Christmas-themed movie. But, don't let the "Christmas" in the title fool you. According to co-star Allen, the movie won't be putting anyone into the Christmas spirit — this ain't no Santa Clause. "It's not a Christmas movie," Allen said during an interview with Radio from Hell X96 . "It's very dark. I would say it's a comedy, but it's not for children." Let that be a warning to all families curling up on the couch to stream a Christmas movie: you might be better off with A Christmas Prince.