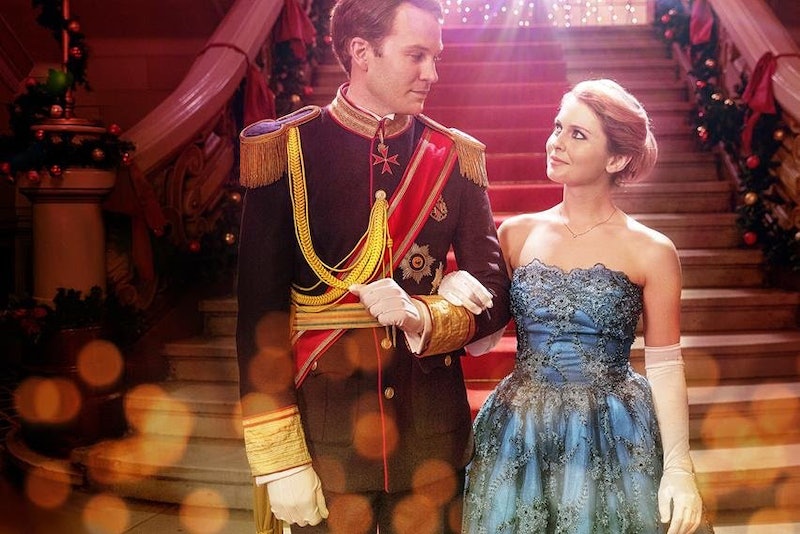 Every year, a number of new Christmas films are released in theaters and on television, with each hoping to become a new holiday favorite that people will come back to year after year. Most fail in this regard, but this year, Netflix appears to have succeeded with their new film A Christmas Prince; the Netflix movie everyone's obsessed with in 2017. So what exactly is A Christmas Prince, and why are people going so nuts over it?

The movie premiered on Netflix back on Nov. 17, and since then it has slowly but surely built up a dedicated fanbase. A Christmas Prince is a Christmas-themed romantic comedy that stars iZombie's Rose McIver as unlucky-in-love magazine reporter Amber who takes an assignment to the European country of Aldovia (which doesn't exist) to research the nation's handsome and enigmatic prince, who's soon set to become the nation's king but doesn't appear interested. Amber ends up sneaking into the castle, which sits atop a picturesque snowy mountain, after she is mistaken as the tutor for the prince's wheelchair-bound young sister. She stays incognito to further her story, but instead ends up falling in love with the prince. So what's so amazing about the film? Just watch the trailer.

As you can see, the movie is a big departure for Netflix. In recent years, the streaming service has built a reputation as a purveyor of premium content, with most original Netflix films falling into the category of prestige, critically-adored productions. A Christmas Prince is a whole different kind of animal. The film instead looks like a carbon copy of a Christmas Hallmark Channel or Lifetime movie, and its trailer plays like a beat-for-beat parody of one of those films. But the film is not a parody, it plays its premise straight, and though it seems like Netflix is self-aware of what kind of film they're putting out here, the film will still be enjoyed unironically by people who like watching those types of cheesy made-for-TV holiday films.

When people tune in to a Lifetime holiday movie, they're pretty much expecting it to be a guilty pleasure, but not something that's going to win any awards. A Christmas Prince, meanwhile, stands out among its Netflix brethren for being that kind of film It hits every cliche in the Christmas movie genre, and has no shame about that at all. For instance, why do the people of Aldovia, which isn't a real place but sounds Eastern European, all have posh English accents? It makes no sense, but that's kind of the point. Again, if you watch the trailer, it really does seem like Netflix — knowing its reputation as the hippest TV network in town — is trying to sell the film on its guilty pleasure quality. And it appears to be working, as Twitter is full of people commenting on how much they loved the film — with most posts showcasing a tongue-in-cheek element.

So whether you legitimately love cheesy made-for-TV rom-coms, or you just enjoy hate-watching movies that are so bad they're good, it's not hard to see why everyone's talking about Netlix's A Christmas Prince.