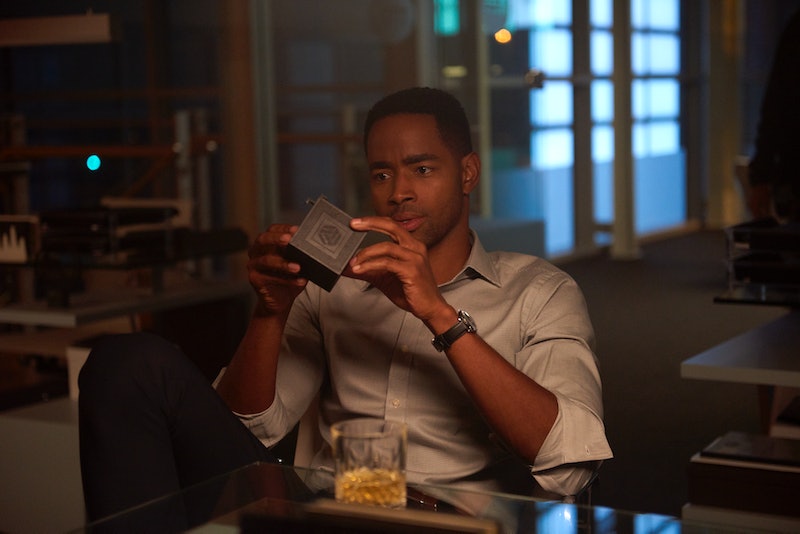 Over the past few years, escape rooms have become a popular group activity, whether on reality shows like The Real Housewives or in real life, as a logically challenging substitute for a brunch. It seems believable then, that the new movie, Escape Room, out Jan. 4, could be a movie that portrays a true story. But seeing as the upcoming film portrays a Machiavellian horror narrative about a group of strangers who have to solve a series of puzzles in order to survive, you can rest assured that Escape Room is not based on a true story.

Just because the new scary film about a hellish escape room isn't based on reality doesn't mean that scary escape rooms don't exist. Well, any escape room would be pretty terrifying for anyone who has claustrophobia or is an introvert whose greatest fear is being trapped in a room filled with people after they've had their fill of social time for the day.

But scary escape rooms that actually put people in haunted house-like situations exist in various locations, including one in Southern California called The Basement. Mr. Escape, located near Toronto, actually puts groups of people into a creepy locked room with the Annabelle doll from The Conjuring. But even with actual horror movie-inspired escape rooms in existence, the movie will show you something completely new — and entirely fictional.

As Den of Geek points out, Escape Room takes a sci-fi approach to a horror story that kind of resembles the 1997 movie, The Cube. Escape Room might also sound like it bears similarities to a few of the Saw movies's premises, but so much of what happens in one of the first movies of 2019 has a noticeably modern feel. The six strangers who meet in the escape room are faced with the task of both competing with each other and working together in order to get out alive, but after each success of solving a puzzle, another terrifying task is presented.

Among those tasks is a virtual-reality like situation, as the trailer shows the group of characters appearing at a frozen lake. "Are we outside?" one of them asks, and Danny (Nik Dodani) puts his hand up to feel a screen-like wall. That doesn't mean that that frozen lake is fake though, because Danny somehow crashes into the ice, submerging into the cold water at the push of the mastermind behind the game's button.

As for who that mastermind is, you'll have to see the movie to find that out, along with whether or not the group of six who get trapped in the room together somehow outsmart the game. As an audience member, you'll be hoping that the group of unfortunate characters can figure out a way to save themselves, not just because you don't want to watch every single person die, but also because the cast in Escape Room includes a lot of familiar faces, including Atypical's Dodani is joined by Insecure's Jay Ellis, Lost in Space's Taylor Russell, and Daredevil's Deborah Ann Woll.

There are a lot of aspects of this new movie to be excited about, especially, for escape room fans, the fact that it's not a true story.