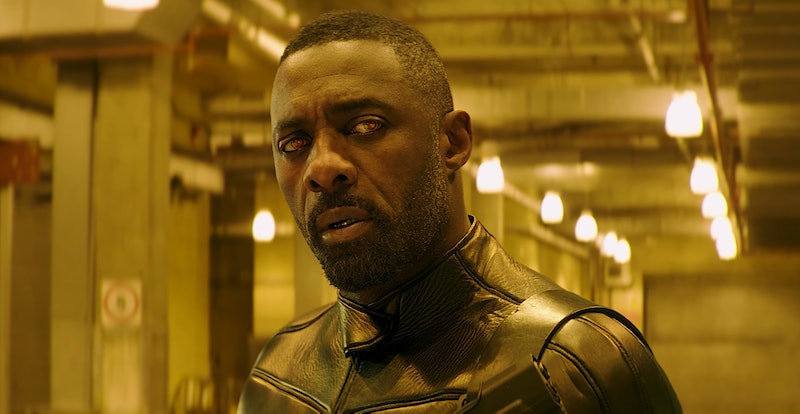 Every action hero needs an equally capable villain, and in Hobbs & Shaw, the titular heroes are up against a particularly good one. In the Aug. 2 release, Luke Hobbs (Dwayne Johnson) and Deckard Shaw (Jason Statham) face off against Brixton Lore (Idris Elba), a rogue MI6 agent whose bodily modifications make him the "Black Superman." But Brixton isn't working alone, and has support in the form of Eteon, a shadowy organization backing him up and setting him off on a mission to secure a virus that promises to "improve" humanity as we know it by merging us with machines. It's the stuff of science fiction, to be sure, but could an organization like Eteon exist in real life?

While the movie doesn't go into too much detail about how Eteon believes a half-human, half-machine hybrid is supposed to "improve" humanity, there are a lot of interesting connections between that aim and some real-life movements dedicated to exploring the intersection between humanity and technology.

Consider transhumanism, which is a philosophical movement founded on the belief that technological solutions can help humanity transcend its current intellectual and physical limitations. As The Guardian explained in their writeup on transhumanism and its goals, one of the foremost aspects of that transcendence involves the literal merging of technology with the human body. This is exhibited in Hobbs & Shaw via Brixton's modifications, as his body is enhanced genetically to provide him with superhuman abilities, which were granted to him by Eteon. In the clip below, Brixton calls himself "human evolutionary change," evoking some very transhumanist themes.

That said, the transhumanism movement doesn't completely line up with the Eteon ethos. As they employ Brixton to take those abilities and directly threaten humanity with mass "modification," real life transhumanists, such as Professor Nick Bostrom of Oxford University, advocate for a more careful, measured approach toward the integration of technology and life. In a paper published in the Journal of Evolution and Technology in 2002, Bostrom detailed some very specific worries regarding the rapid advancement of technology and its inexorable march towards a potential singularity, which includes "genetically engineered biological agents" — which is, once again, presented in the Hobbs & Shaw story as the virus Brixton is after.

Eteon itself represents a continuation of the rising stakes within the Fast & Furious franchise. Remember that The Fast & the Furious is as an action flick that focuses on an undercover police officer trying to bust a gang of thieves. Over the course of eight films, with Hobbs & Shaw being the ninth, this found family of misfits has gone up against rival gangs, Yakuza gangsters, terrorists, anarchists, and hackers. Now, though, these heroes are going up against entire organizations boasting super soldiers and advanced technology.

So while yes, a lot of those stories within the "mainline" Fast & Furious franchise feature enemies with similar technology that's more Hollywood than reality, Hobbs & Shaw really seems to escalate with their technology-focused, shadowy spy organizations and viruses. The movie's nature as a spinoff is reflected in this departure, as it works on pulling in much larger, more unbelievable stakes, allowing it the opportunity to stand out on its own within a franchise that is becoming more and more about power fantasies with every entry. That's not to say it's an unwelcome fantasy, as sometimes it's just fun to go on a wild, action movie ride — however unbelievable.

As for whether an organization like Eteon can exist in real life, well... it bears wondering how anybody could even tell if it exists or not, as the entire purpose of such an agency is to carry out its objectives in total secrecy and obfuscation. Doing their job properly means nobody would ever know. That is, unless there's a real life Hobbs and Shaw pair somewhere poised to expose them and prevent humanity's extinction, all with big, cinematic explosions and wild stunts. It's usually hard to ignore those.