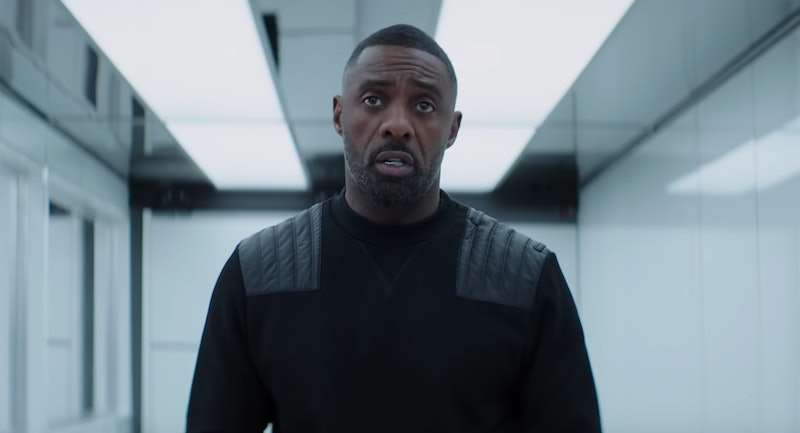 When Paul Walker, Vin Diesel, Michelle Rodriguez, and the rest of the crew zoomed onto the silver screen in 2001's Fast and the Furious, nobody could have imagined what the franchise would become over the next 18 years With eight Fast and Furious movies already out in the world, the first spinoff film, Hobbs & Shaw, hits theaters on Aug. 2. As you can probably infer from its title, the new Fast spin-off focuses on Dwayne "The Rock" Johnson's crime-fighting character Luke Hobbs and Jason Statham's former-assassin Deckard Shaw, but Idris Elba's Hobbs & Shaw character might just steal the show based on fans' reaction to his "Black Superman" title.

While Elba's character is technically named Brixton Lore, he calls himself "Black Superman" in the trailer, and he's definitely not a part of Hobbs and Shaw's revered family. In fact, it's the family that causes Elba's villainous character to threaten Hobbs and Shaw, after Deckard and Owen's (Luke Evans) sister, Hattie Shaw (Vanessa Kirby) — an MI6 field agent — steals a hazardous virus from Brixton's lab. See, Brixton used to be an MI6 agent, but at one point he became a "cyber-genetically enhanced soldier," per Cineworld. Brixton may not actually be the Superman of the DC comics, but he certainly has super powers, as he has super-strength that allows him to toss The Rock like he's mere pebble.

On The Rock's Instagram post previewing Hobbs & Shaw in January, he called Brixton "The Baddest Bad Guy the Fast & Furious franchise has ever had." It seems that Elba's role is one for the ages.

With so much MI6 involvement, plus the futuristic technology in the Brixton's, it has to be noted that Hobbs & Shaw seems to nod to another long-running film franchise: James Bond. There's some irony there, due to the many rumors that Elba would play the next James Bond, taking over for Daniel Craig. Hobbs & Shaw almost referred to it directly. That trailer line was changed. Elba was originally supposed to declare himself "the Black James Bond."

In an interview with Variety, Elba explained that he wanted the line changed, because "it’s too close to what everybody’s talking about." In the same article, Johnson took credit for coming up for what the line ended up being, even though others were apparently trying to claim it was their idea, including Elba, who said he improvised it.

Regardless of who came up with the line — it sure did take off on social media, and it'll likely incite claps and cheers from audiences.

Despite the goodnatured dispute about who came up with the line, Elba told Entertainment tonight Canada how it feels to join the action series, even as a villain. "It's super exciting to me just because it's one of the most successful franchises in the world," the actor said. "My character that was written is very exciting, he's a real sort of step away from the kind of characters I get to play."

Fans will likely love to see Elba as this new robotically-enhanced character, and as much as you're meant to root against him, it's OK if you secretly want to see him stick around. But look at how Deckard went from being Hobbs' greatest enemy in Furious 7 to teaming up with him in Hobbs & Shaw. Elba's villain could be the next to come to the other side.

More like this
Anne Hathaway Shared A "Thrilling" 'Princess Diaries 3' Update
By Darshita Goyal
The 'Scream 6' Trailer Shows Off Hayden Panettiere's Return & Ghostface In NYC
By Jack Irvin and Jake Viswanath
Netflix Shut Down 'Bridgerton' S3 Rumours About A “Very Dark” Storyline
By Bustle
'The Queen’s Gambit' Season 2 Tweet Wasn’t From Anya Taylor-Joy
By Mary Kate McGrath, Jack Irvin and Grace Wehniainen
Get Even More From Bustle — Sign Up For The Newsletter
From hair trends to relationship advice, our daily newsletter has everything you need to sound like a person who’s on TikTok, even if you aren’t.